On December 23 2014, a Berkeley, Missouri, police officer shot and killed a teen who pulled a gun and pointed it at him.

Thereafter, “approximately 100 protesters” gathered, some of whom jumped and assaulted police, hitting them with bricks.

In self-defense, officers had to fight hand-to-hand with some of the protesters.

According to Mail Online, an unnamed Berkeley officer responded to a theft call at a Mobil gas station. When he arrived, he began talking to 18-year-old Antonio Martin, who then pulled a handgun and aimed it at the officer. The officer responded by shooting and killing him. 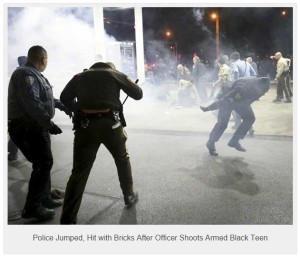 After shooting Martin, the officer and others who arrived on scene were soon surrounded. Protesters set off “three explosives” near where police encirled Martin’s body. One of the explosions “was right near a gas pump.” Protesters then assaulted police, striking some with bricks. Some protesters “brought rocks with them to throw at cops.”

At least one officer was wounded by a brick, and one was wounded while trying to escape the explosions.

Police Chief Jon Belmar expressed his condolences to Martin’s family, but he also pointed out that Martin could have prevented the tragic outcome if he would have dropped his weapon.

Said Belmar, “It didn’t have to end with him approaching the officer with his arm extended with a 9mm pistol in his hand.”

Martin’s mother told the St. Louis Dispatch that “it doesn’t make any sense for them to kill [her] son like this.”