In the space of five days the city of Memphis, Tennessee, has seen its second fatal shooting by a homeowner against reported armed home intruders.

TheBlaze reported the first instance which occurred Tuesday when a woman answered a knock at a front door. When two men reportedly forced their way in — one of them putting a gun to her neck — the homeowner fired multiple shots at them. One alleged intruder died and the other escaped. 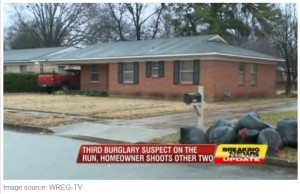 On Saturday a similar scenario went down about 9 miles southeast of Tuesday’s shooting when three suspected burglars — two of them armed — entered a residence, WREG-TV reported.

But this homeowner was armed, too. And he reportedly gave a verbal warning to the trio not to take another step toward him — but they refused, WREG reported.

One neighbor told WREG that the homeowner simply wanted to protect himself. 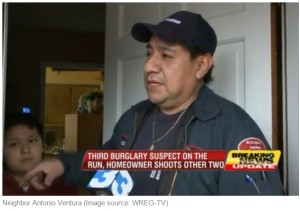 “Anybody with common sense, if you walk in your house and there’s two people in there ain’t got no business in there, got guns, you’d do the same thing he did,” the neighbor told the station.

Antonio Ventura, a father of two, told WREG he’s concerned his home might be next, adding that the homeowner who fired the fatal shots has been targeted before.

“This is the second time it happened to him cause the last time not long ago, maybe like a year ago I hear he came back from work and somebody followed him and beat him up and they took his truck and run away,” Ventura told WREG.

Police are looking for the third suspect, the station noted, adding that no charges had been filed against the homeowner.


Previous Anti-Gun Groups: Even Their Names Are Lies

Next Diabetic Man, Fearing Coma, Turned Away By McDonald's Manager