Tony Rivoli, owner of Rivoli’s Italian & Seafood Restaurant in Tom’s River, New Jersey, has come under fire for a controversial sign they placed outside of their establishment that reads, “I can breathe. I obey the law.” Some are saying it mocks the death of Eric Garner.

When word got around the community about the sign, it began to be shared around the Internet via social media and as you might expect, it resulted in many different reactions by those who saw it. 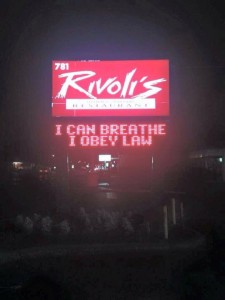 “I applaud the owner and am sure if I am down the shore again to definitely visit this establishment!” one Yelp user wrote in support of the restaurant. “I refuse to let anti law enforcement ruin this mans business. People wearing t shirts saying I can’t breathe is acceptable but this isn’t? Police, fire and ems put their lives on the line daily for all of us!”

Still, there were others who felt the sign was in poor taste, and they didn’t hold back in expressing as much.

One user commented “Anyone supporting this restaurant’s behavior is just as sick in the head as they are! Absolutely Sickening to mock someone that was murdered. Unreal!”

The website known as Cop Block blasted the restaurant owner’s decision and pointed out that the sign speaks to a larger issue.

“When a man says ‘I OBEY LAWS’ all I see is the ‘I OBEY’ part,” Cop Block posted. “What kind of man could happily, publicly state that he is always obedient to his masters and still call himself a man?”

What is your opinion on the sign the restaurant posted, was it in poor taste or do you agree with the statement? Leave us a comment below.