On December 28 2014, “distinguished” Occidental College Professor Peter Dreier [Email: [email protected] Phone: (323) 259-2913 Website: www.peterdreier.com] claimed those looking for a cause behind the December 20 executions of NYPD officers, Wenjian Liu and Rafael Ramos, need to quit pointing the finger at NYC Mayor Bill de Blasio (D) and start pointing it at the NRA.

According to Dreier, “[The] NRA has blood on its hands for the deaths of NYPD cops.”

Published in the Huffington Post, Dreier writes that Peter Lynch–head of the Patrolmen’s Benevolent Association–“is garnering headlines by blaming New York City Mayor Bill de Blasio for encouraging protests against police” in the wake of the jury’s decision not to indict following Eric Garner’s death. 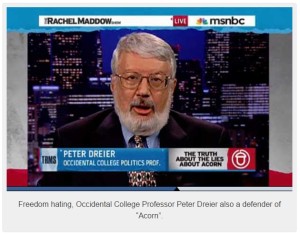 Dreier claims Lynch seizes on de Blasio’s criticism of “police abuses” but overlooks evidence that he’s “been a strong defender of New York’s police department” in other ways.

Most importantly, Dreier claims that Lynch also overlooks the NRA’s alleged culpability in the NYPD executions. After all, “the NRA … defends the right of Americans to carry concealed weapons in bars, churches, schools, universities, and elsewhere. This poses a huge threat to police and civilians alike.”

Furthermore, the NRA opposed more gun control at the federal level when Senators Dianne Feinstein (D-CA) and Joe Manchin (D-WV) pushed it in April 2013. Dreier tries to show that this opposition to gun control opened the door for gunman Ismaaiyl Brinsley to acquire his firearm.

Breitbart News previously reported that Brinsley stole the gun he used in a 2011 crime. Dreier gives lip service to this, then quickly pivots to say that the fact that law enforcement cannot pinpoint how Brinsley acquired the gun he used on December 20 means he may have bought it online [because guns are so easy to get online…right!??] or from “a gun show.”

Dreier admits there is a chance he may have stolen it, but that this is beside the point.

The lesson Dreier wants to make is that we need more gun control now, and the NRA is to blame for preventing it.

Next The face of peaceful Protesting in Ferguson, Mo Up on Charges