A baby girl named Betsey died, having being starved to death while strapped in her car seat as her parents ate a Florida Golden Corral restaurant.

The parents of the 22-day-old baby have been charged with first-degree murder, police said on Tuesday, accusing them of neglecting the suffering infant.

Ruby Stephens, 23, and Roy Stephens, 48, of Indiana, were visiting relatives in central Florida on December 23 when they called 911 after discovering the baby was unresponsive in their car, according to Lakeland Police. 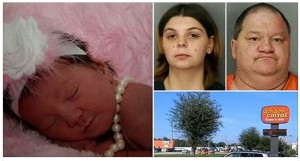 ‘She suffered tremendously over the 22 days that she was alive,’ Mike Link, assistant chief of Lakeland Police, told a news conference.

He called photographs of the baby ‘absolutely horrible.’

‘When I saw the photographs…it shook me to my core because in thirty years, I have never seen anything like that,’ Link told MyFox Tampa Bay.

An autopsy found Betsey weighed only 4lbs 1 ounce at death, having shed about 2lbs since her birth. Normal weight for her age was about 8lbs, the medical examiner’s office noted.

The baby was also dehydrated and appeared not to have been fed for six to seven hours prior to her death, according to the report.

Next Police Officers Hospitalized In Boston After Being 'Kicked, Punched and Choked' By Group of Teenagers