In a Slate examination a few years ago about why more 9/11 attacks aren’t perpetrated, one argument stuck out: terrorists are stupid.

See you now the case of Mark Taylor, a New Zealander who ditched his home country to help wage jihad with ISIS. Taylor has been tweeting his pro-jihadist message ever since, apparently unaware that the geotag function was on, giving his precise coordinates. 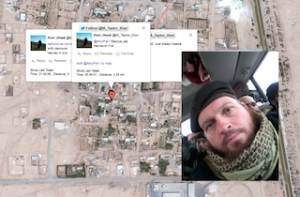 iBRABO, a Canadian intelligence research group, caught the tweets before Taylor could delete them (and delete them he sure did).

“The benefit of material like this when examining foreign fighters is it allows investigators to establish the extent to which an individual is tied to a terrorist group like Daesh (ISIS),” iBRABO wrote. “In this manner they can better justify potential criminal charges against the individual and at the very least build grounds for their detention and investigation upon their return.”

Sure enough the group was able to reconstruct Taylor’s movements from his various tweets, which also gave context to the photos he tweeted. (I.e., other jihadists featured in his photos can now be pinpointed as well.)

Taylor has apparently since figured out how to turn off geotagging, but iBRABO is confident he’ll screw the pooch again. “With luck he will fail to read the manual on his next shiny new phone!” the group wrote.