Bart Bryson, a homeowner in Idaho, discovered a burglar in his unoccupied home.

The burglar “bumped” into him and he fired two shots into the floor.

“A voice yelled at me ‘please don’t shoot me’ and came running at me, and I grabbed my pistol,” Bryson said.

The man bumped into him, knocking him back, he said. That’s when Bryson fired two shots into the floor. 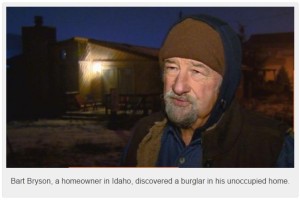 Unfortunately, Bart had left his cell phone at home.  Bryson works as a security officer. He had handcuffs in is his car.  He decided to cuff the suspect and take him to police headquarters.  The suspect asked him: would you shoot someone over a burglary?

But as he was searching for the cuffs under the seat, however, the man bolted, Bryson said. Bryson began shooting again, firing several shots into the ground. He says he did not want to kill anyone over a burglary.

Bart took the correct action in not shooting at the suspect, clearly, as he ran off, the suspect was not a threat.   Sometimes, “warning shots” stop a fleeing suspect, but sometimes, they just run faster.  The gun shots alerted the neighbors to call the police, so they had some positive effect.

The interesting thing is that with all the “warning shots“, Bart ran out of ammo!

While everything worked out without anyone getting killed or injured, this reinforces the axiom that you can never have too much ammunition; and that warning shots use a potentially precious resource.  In addition to spare ammunition, Bart will likely be more careful to bring his cell phone with him in the future.  The military has a saying: you have to be able to move, shoot, and communicate.  By the end of this encounter, Bart only had one of those necessities.

Keep Reading: Concealed Carry Ammo Capacity: How Much is Enough?

Next [PHOTO] Sarah Palin Posted This, Showing Her Son Trig, And It's Likely to Create Outrage