Burger & Lobster’s new Cardiff restaurant has caused a storm after posting a picture of a family who allegedly left without paying online.

The post, which appeared on Facebook this week, triggered a flood of protests from other customers who were furious at the family being ‘shamed’ in public over the apparent bill blunder. 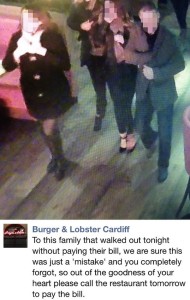 “To this family that walked out tonight without paying their bill, we are sure this was just a ‘mistake’ and you completely forgot, so out of the goodness of your heart please call the restaurant tomorrow to pay the bill. Thanks.”

The restaurant later deleted the photo but not before more than 600 people had commented on it.


The tone of the post was not well received by many of the restaurant’s more than 2,700 fans.

Francesca Coles wrote: “People make mistakes like this all the time, especially if there is a few of them.

“I’ve had to go back and pay after leaving and realising. Not a very professional approach by this food chain if these customers have left in error!

“I don’t like the way in which you operate and puts me off ever coming into your establishment! Disgusting!”

Oliver Price agreed: “Genuinely a disgrace posting this on a social media platform.

“If this is a mistake and they come back and pay how are you going to ‘re inform’ everyone who saw this that they made a genuine error. Terrific social faux par here.”

And Mink Kleekai added: “Disgraceful action by the restaurant, they have given this family little time to make amends before trying to publicly shame them on social media.

“Totally unprofessional management of this situation, which makes you wonder if the front and back of house are also mismanaged.”

However, a number of posters said the restaurant was right to shame the group.

Burger & Lobster insisted that the post was ‘made with the intention of encouraging the guest in question to come back and pay for their mistake to rectify the loss for the business.’


Previous [VIDEO] Thug Tries To Rob Business Owner, But It Doesn't Go According To Plan