CNN’s Poppy Harlow interviewed Milwaukee Sheriff David Clarke about the recent protests that some in the Black Community have sparked after the police related deaths of Michael Brown and Eric Garner.

Harlow asked the Sheriff, who has been on several news shows on Fox and others, about a tweet he sent out implying that if Black lives mattered the protesters would be outside abortion clinics because of the high numbers of black babies killed by abortion. 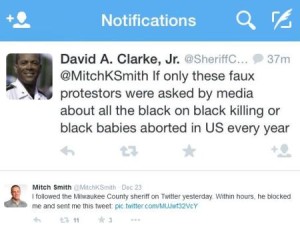 The tweet sent by Sheriff Clarke, a black man himself, was sent to Mitch Smith, Journalist in the Chicago bureau of The New York Times and read, “If only these faux protesters were asked by media about all the black on black killing or black babies aborted in US every year.“

Poppy asked the Sheriff if he sent the tweet, “Yes I did,” Sheriff Clark responded.

He continued, “When I hear these things that Black lives matter, the only people who really believe that statement are American police officers who go into American ghettos every day to keep people from killing each other. Alright, so, yes I did say that and I meant it. Look, the abortions? If Black lives – if they really mattered, that’s where the outrage would be that’s where we’d see protests…”