Cheyanne Willis says she was beaten up, threatened and humiliated by her ex-boyfriend and several women while others took video on their cellphones and later posted it on Facebook.

The 19-year-old said her attackers slapped her, cut her hair, wrote “I got my ass whooped” on her forehead in eyeliner and even signed their names.

The video is disturbing, pierced by Willis’ pleas and cries, muffled by others’ angry shouts.

Now Willis says she is in constant fear and she is frustrated because she filed a police report but her attackers are still out there bragging about it.

“I wanted to just die. I really wish they would have killed me. I don’t want to be here no more, honestly,” she told our Scripps station in Cincinnati, WCPO.

Willis says this is all about a car she tried to buy.

The car owner — one of her attackers — says Willis stole it.

Willis says her then-boyfriend set her up for the attack by driving her to a mall parking lot about 5:20 p.m. on Christmas Eve, where she was ambushed. She said she knows a couple of the women who joined or recorded the attack.

Afterward, a store owner saw her, let her in and called police. An officer took her to a hospital.

The next day, police charged Quincy Gardner, 20, and Cheyenne Fisher, 21, with robbery, according to the police report.

Willis said they took her purse with $50 and her cellphone and ripped up her driver’s license. She said they threatened to kill her if she called police.

Willis has bruises and a concussion, but her emotional scars are worse. 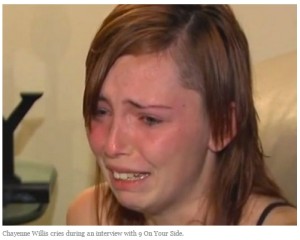 “I’m traumatized. I jump at every noise I hear. I don’t want to leave my mom’s side,” she said. “I’m scared to show my face if I’m out, and as if that wasn’t enough, these photos have spread all over.”

Willis’ sister, Amber White, said she is angry.
“It had my blood boiling, to be honest. I was real mad and upset,” White said.

Willis said retaliating wouldn’t do her any good.

“My hair’s cut. I’m not the same. I just want justice … People are saying, ‘Well, go fight back.’ This is me fighting back.”