A babysitter has been charged with child abuse after she admitted to burning a toddler so badly during potty training that he was left with third degree burns and needed to learn how to walk again.

Mary Ann Garrett was in charge of Caden Collumns’ care at her home daycare in El Dorado toddler in October when he was seriously injured. 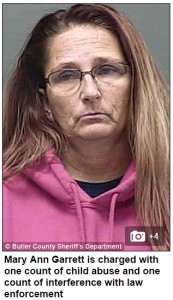 She originally told police the two-and-a-half year old had been burned by another child at her home, although she later confessed.

Caden was burnt with hot water from a removable shower head.

Butler County Sheriff Kelly Herzet says Garrett lied to detectives at the start of the investigation, and as a result she has also been charged with one count of interference with law enforcement.

“After she had done it and took the child to the hospital, she blamed her own granddaughter for doing it,” said the prosecutor, reports KWCH.

Garrett even made her three-year-old granddaughter spray Booth with the shower water, making the girl believe she was responsible, according to investigators. 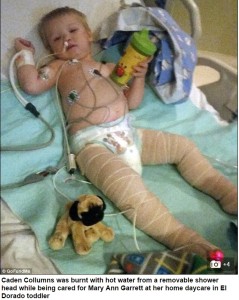 The toddler spent more than one month in intensive care, according to his mother, and was so badly injured that he had to learn how to walk again.

“There are third degree burns on his lower extremities,” a prosecutor told the judge. “He will have scarring the entirety of his life.”

Caden’s mother, who is raising him alone, says he spent one month on pain medications and is now using a feeding tube, but doesn’t have any appetite.

A Go Fund Me page has been created to help cover her medical expenses.

Next LAWSUIT: Woman Suing Hospital For Amputating Her Hands and Feet