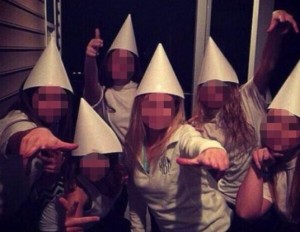 I’m gonna go out on a limb, here, and speculate that pre-2008 you would probably never see this kind of thing coming from a bunch of high school aged girls. But, perhaps in the wake of electing the first black president who seems to enjoy fanning the racial flames, all the Ferguson/NY shootings, and the Sharpton on steroids consults in the White House there is a surge of white people getting a little sick and tired of being attacked, with the blessing of the politically corrected culture which has taught generations of anyone who isn’t black, Hispanic or Muslim to hate themselves.

The Grio reported, Nash Rocky Mount, North Carolina community members are lathered up over this display of girls posing, on social media, in KKK garb and shooting fingers into the lens. So much so, some are demanding that punishment be rendered by the school. Just one catch. The photo was taken after hours and away from campus.

There are so many things wrong with this situation; I don’t know where to start.

While what the girls did is more than a bit extreme, why does a town insist on administering discipline outside from entities outside the family? The county sheriff said no laws/ordinances were violated.

And what of the parents? Kids do stupid and inappropriate things. They just do. But, are the parents weighing in? Have the parents even had a chance to intervene? Are they condemning the behavior, supporting it, or forced into defense mode, trying to protect their offspring, because the town has taken up torches and pitchforks?

Is it a coincidence that the two reporters from ABC-11 are black? Does that punctuate the political incorrectness of the issue, or insinuate that blacks are more persecuted in North Carolina?

It’s an interesting sociological observation. How far have we come from self-governance? Back in the day, a small town’s values were upheld within the community, without jumping to a bureaucratic entity to administer “justice/punishment.” No doubt there will be more hay made of this story, if only to perpetuate political correctness. Never let a good crisis go to waste.


Previous Blogger To Be Publicly Flogged For Insulting Islam

Next Little Russian Girl Gives As Good As She Gets