So-called Islamic State flags have appeared on the websites of several municipalities near Paris whose homepages were hacked. The hacks come amidst an intense manhunt to capture two suspects believed to have committed the Charlie Hebdo office massacre.

The attacks, apparently carried out by a group identified as L’Apoca-Dz, occurred shortly before midnight on Thursday.
The websites of several communes in the Paris metropolitan area, including Goussainville, Ezanville and Jouy-le-Moutier, were targeted.

The afflicted sites displayed an image of the IS flag with a nasheed or Islamic vocal chant playing in the background. The group, further claiming to speak for IS, denounced both France and Charlie Hebdo in a message written on the homepages of the hacked sites.

The websites have since been restored.


Despite employing the IS flag, L’Apoca-Dz doesn’t appear to have any actual affiliation to the militant group. A quick search has showed a variety of sites hacked by a group flying under the same banner, with no apparent political or geographical consistency.

In one hack targeting a Dutch-based firm, the group posted an image of a Guy Fawkes mask, which is associated with the Hacker collective Anonymous.

The group listed a group of enemies, including France, the USA and Israel, with a statement demanding freedom for Palestine.

The hackers further wrote “Power of Algeria” and “Algerian to the core.” 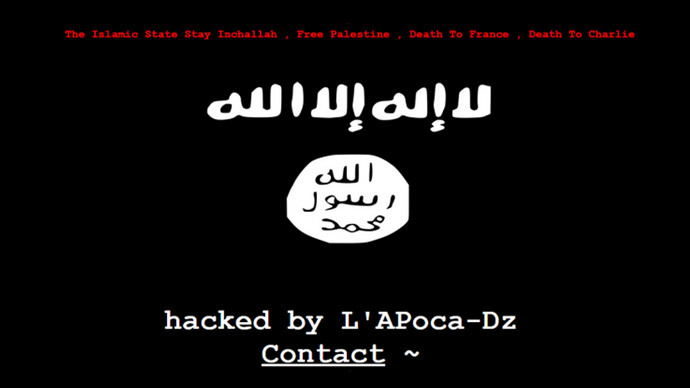