A California newspaper office has been vandalized over its use of the term “illegals” to describe people who are in America without citizenship.

When questioned about the vandalism and as to whether they will change their wording when referencing people who don’t have citizenship, they said that despite the attack by vandals, they will continue to use the term “illegals” to describe people who enter the U.S. without permission.

The Santa Barbara News-Press’s front entrance was sprayed with the message “The border is illegal, not the people who cross it” in red paint, sometime either Wednesday night or early Thursday, according to the newspaper’s director of operations, Donald Katich. 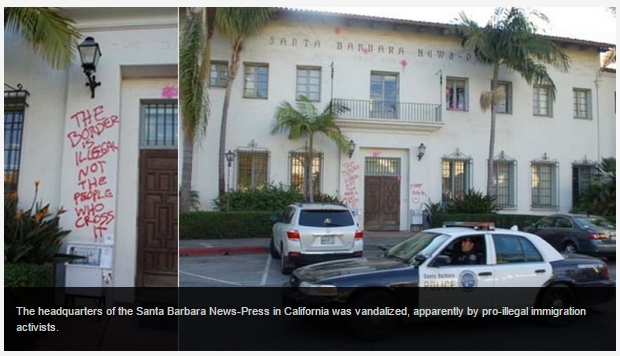 The attack came amid wider objections to a News-Press headline that used the word “illegals” alongside a story on California granting driver’s licenses to people in the country illegally.


“It is an appropriate term in describing someone as “illegal” if they are in this country illegally.”– Statement from Santa Barbara News-Press

“The vandalism and the damage speak for itself, as well as the motivation behind it,” Santa Barbara Police Officer Mitch Jan said. “At this point in time, I don’t really have any suspect information. Without cameras or an eyewitness, we really don’t know who would be responsible.”

In addition to the writing on the building, graffiti espousing a no-borders mentality was scribbled on the walkway through Storke Placita and the sidewalk near Santa Barbara City Hall.

Police were braced for a protest in front of the paper later this week. Jan said hundreds could show up, and the Police Department is aware of the call for a protest.

Next BREAKING: SIX Explosions in France; Suspects In Charlie Hebdo Attack Killed Stand Off over