Sometimes life just hands you a gift, here and there. This morning, I awoke to a facebook irony that made me chuckle with a renewed appreciation for Karma. Hypocrisy has an interesting way of being a target of it. Karma, I mean. 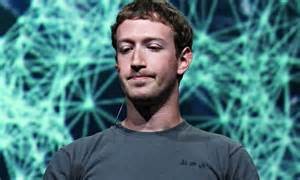 As I scrolled through my morning facebook feed, I noticed this story, on facebook, and not in the mainstream media.

Mark Zuckerberg, the same facebook billionaire that lords over the social media empire, the same empire that has continually imposed sensorship over its own member’s conservative and patriot pages for various conservative “free speech atrocities,” (please note the sarcasm in my tone) has been targeted by Islam for not banning some Muhammad related content.

Yep, that’s right, in the wake of the Paris massacre, Islam has flexed its muscle to go after an even bigger target, facebook.


The irony grows. In as statement, as reported on Vital Buzz, Zuckerberg proclaimed:

“We stood up for this because different voices — even if they’re sometimes offensive — can make the world a better and more interesting place.”

Gee, I wonder if that goes of conservatives, too? Does that mean that conservative pages won’t be pulled down every time some overly sensitive liberal gets their feelings hurt when they read some 2A, small government, fiscally conservative content in their facebook feed?

I’m laughing so hard, I can hardly type. Here’s more of the statement:

“Facebook has always been a place where people across the world share their views and ideas. We follow the laws in each country, but we never let one country or group of people dictate what people can share across the world.

Yet as I reflect on yesterday’s attack and my own experience with extremism, this is what we all need to reject — a group of extremists trying to silence the voices and opinions of everyone else around the world.

I won’t let that happen on Facebook. I’m committed to building a service where you can speak freely without fear of violence.

My thoughts are with the victims, their families, the people of France and the people all over the world who choose to share their views and ideas, even when that takes courage.”

So, as he denounces the violence in France and tries to cover his “ars” in the U.S., I’m wondering just how long, and far reaching this change of persective from the threat on his life will extend to others who use facebook.

Karma. You gotta love it.


Previous Shooting at RedBox; What Happens When You Cannot Run?