On Saturday we reported that George Zimmerman was arrested for aggravated assault and domestic violence, but there’s one little detail about the case that some media outlets took particular note of; the rather strange comment made by Zimmerman’s lawyer after the arrest. 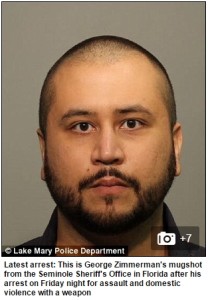 Zimmerman was prohibited by a judge from contacting his girlfriend or going near her, after an incident in which he threw a wine bottle at her.

According to multiple news reports, Zimmerman attorney Don West said, “It’s clear he hasn’t been very lucky with the ladies the last few months,” following his third arrest – this time for allegedly throwing a wine bottle at his girlfriend (Zimmerman, it’s worth noting here, was arrested back in 2013 over an incident involving domestic violence with his then-girlfriend.)

During a court appearance on Saturday morning, Zimmerman’s bond was set at $5,000 and he was ordered to avoid contact with the woman who was not identified.

Back in September of this year, he allegedly threatened to kill a driver during a road rage incident.

Zimmerman is currently out on bond but is due back in court this week.

Next UPDATE: BREAKING: US Centcom account 'hacked by IS'