The declaration comes after Mr. Zimmerman found another way Friday night to illustrate he isn’t smart enough to avoid getting arrested again and again (and again). In this latest chapter, the 31-year-old was collared in Florida late Friday night on charges of aggravated assault with a weapon in Seminole County (no further details are available at this time). 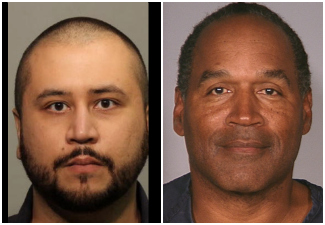 As you may have heard, Zimmerman was once acquitted of charges that resulted from the 2012 killing of an unarmed 17-year-old Trayvon Martin, after a physical confrontation between the two turned fatal when Zimmerman shot him in the chest in what he said (and a jury agreed) happened in self-defense (Note: If you want to retry the case in the comments section below, knock yourself out. That isn’t what this column is about, nor is it supposed to draw parallels around the circumstances of the O.J./Zimmerman cases. The topic here is post-trial behavior).

Anyway, the Zimmerman trial–which some dubbed the Trial of the 21st Century–drew wall-to-wall coverage on the cable news networks, particularly CNN, HLN and MSNBC, resulting in huge ratings bounces for at least the Turner part of the conversation.

So how has Zimmerman acted since winning his freedom? Has he stayed below the radar given the death threats directed at him…or found another occupation to put on his LinkedIn page besides Neighborhood Watchman?

Nope. Not even close.

Not long after the trial, Zimmerman was charged (and later acquitted) of assault in a case of road rage(directed at a neighbor of his, no less). A few months later, he was back in court again…this time for stealing a satellite TV signal. A judge fined him a whopping $25,000.

Does it stop there? Of course not. Just eight weeks later, his (then-estranged) wife called 911 and said he struck her father while waving a gun in her face. Zimmerman was arrested, but again walked away after said wife and father-in-law decided not to press charges.

In November of 2013, his then-girlfriend called 911 and told the operator Zimmerman was brandishing a gun and threatening her as well (police later stated the firearm in question was not at the scene). Said girlfriend (Samantha Scheibe) later decided the couple should “talk and work things out” and decided not to press charges. And just this past summer, Zimmerman was questioned by police for voluntarily patrolling a gun store. You can’t make this stuff up…

If all of this sounds familiar, it’s because it is. O.J. Simpson–the star of the Trial of the 20th Century (with respect to Kato and Judge Ito)–also was seen by many as a guy who got away with murder (two). But The Juice–not realizing just how lucky he was to not be sitting in some version of Shawshank West–just kept finding ways to land back in the spotlight, and for all the wrong reasons.

This above-the-law mentality eventually caught up with him, however, and the 67-year-old Simpson is now serving 33 years in a Nevada prison for attempting to steal back sports memorabilia he claimed belonged to him in a robbery as silly as something seen in the Naked Gun trilogy.

People rarely change in any significant way, so it wasn’t surprising to learn Zimmerman had again been arrested Friday night. He may have been the big winner in the Trial of the 21st Century, but will likely end up in the same 6×8 cell the star of the Trial of the 20th Century is counting the days to his 100th birthday in, if he continues the path he’s on.

Next [VIDEO] BILL MAHER On Islam: ‘When There’s This Many Bad Apples,’ The Orchard’s Rotten