Actor Liam Neeson is thrilled to rake in millions of dollars acting in violent films where vigilantism is at the core of the plot, but he doesn’t think that the American citizens who watch his movies should have a right to own guns.

Liam Neeson might be brandishing a gun on posters for Taken 3 all around town, but in light of the recent Charlie Hebdo attacks in France, and ongoing protests against police brutality in America, the actor told tabloid! he’s still firmly in favour of gun control.

“First off, my thoughts and prayers and my heart are with the deceased, and certainly with all of France, yesterday,” he said. “I’ve got a lot of dear friends in Paris.” He then reportedly linked the attack to gun ownership in America.

“There’s too many [expletive] guns out there,” he said. “Especially in America. I think the population is like, 320 million? There’s over 300 million guns. Privately owned, in America. I think it’s a [expletive] disgrace. Every week now we’re picking up a newspaper and seeing, ‘Yet another few kids have been killed in schools.’”

“Let’s not get into it,” he added when asked if the issue extends to police responsibility. “Let’s put it this way: I think a light has been shone on the justice system in America, and it’s a justifiable light.” 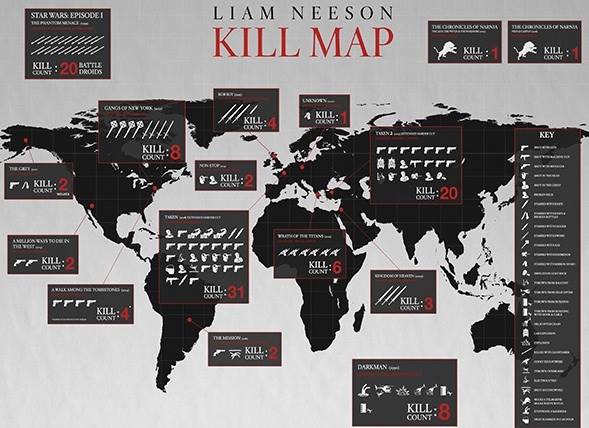 Neeson is not only a gun-exploiting hypocrite, he’s also factually wrong: despite utterly false propaganda from gun prohibitionist groups like Moms Demand Action.

When asked if he saw duplicity in fervently pushing gun control while making a living with a gun in his hand, Neeson said:


“A character like Bryan Mills going out with guns and taking revenge: it’s fantasy. It’s in the movies, you know? I think it can give people a great release from stresses in life and all the rest of it, you know what I mean? It doesn’t mean [the viewers] are all going to go out and go, ‘Yeah, let’s get a gun!'”


Previous Check out this viral picture of Obama everyones talking about

Next This Billboard in Alabama Has People Squirming, For The Protection of Our Followers The Feature Image Has Been Edited