This story, in the Daily Mail, reports how King, North Carolina, caved under pressure of mounting legal fees from an Afghanistan war vet, who filed suit against the city to remove religious symbols from the Veteran’s Memorial. All because . . . you guessed it,  . . . it violated his constitutional rights and offended non-Christians. They also awarded this “great patriot” $1 in damages after paying nearly $50,000 in legal fees to fight the issue. 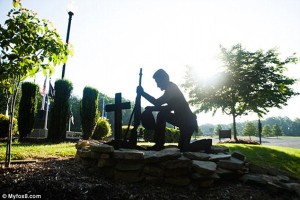 The city of King is settling a lawsuit by removing a Christian flag and statue of soldier kneeling by a cross from the Veteran’s Memorial at King Central Park.

The Winston-Salem Journal reported the city council voted 3-2 Tuesday to approve the settlement. Under the agreement, the city will not fly the Christian flag and will remove the statue depicting a soldier kneeling before a cross-shaped marker.

The city said in a news release that it had incurred more than $50,000 in legal fees and costs.

A U.S. Army veteran sued in November 2012, alleging King officials violated his constitutional rights by allowing the Christian flag to fly at the memorial.

Fox News reports that the memorial was paid for with private donations.

‘Both sides in this matter wish to avoid further costs, and this agreement will ensure that the City of King will not spend additional taxpayers’ funds to continue litigation in federal court,’ the city said in a statement.

Hewett said he sued because he felt his constitutional rights were being violated.

He will be paid $1 in damages.

‘I proudly served alongside a diverse group of soldiers with a variety of different religious beliefs,’ he said. ‘The City of King should be honoring everyone who served our country, not using their service as an excuse to promote a single religion.’

However city councilman Wesley Carter felt the city was forced to settle.

‘I feel this city has been sabotaged and bullied by folks who don’t believe in what this community stands for,’ he said.

‘I feel like we have been pressured by insurance companies and attorneys who have never been to King. They don’t know what we are about and what this community stands for.’

Next These Kids Never Stood A Chance