According to the Birmingham News, the billboard apparently went up last Friday. And this isn’t the first racially-charged billboard to go up in the area, either. This one went up near Leeds, Ala. in June 2013 sporting a similar color scheme and typeface:

A billboard of mysterious provenance has gone up along Interstate 59 near Birmingham that simply declares, “DIVERSITY MEANS  Chasing Down The Last White Person #white genocide.”

The billboard appears similar to one posted near Leeds in June 2013 which read “Anti-racist is a code word for anti-white.” Though the billboard was within Birmingham city limits, Leeds mayor David Miller denounced that billboard’s “racist message” at the time due to its proximity to the city. 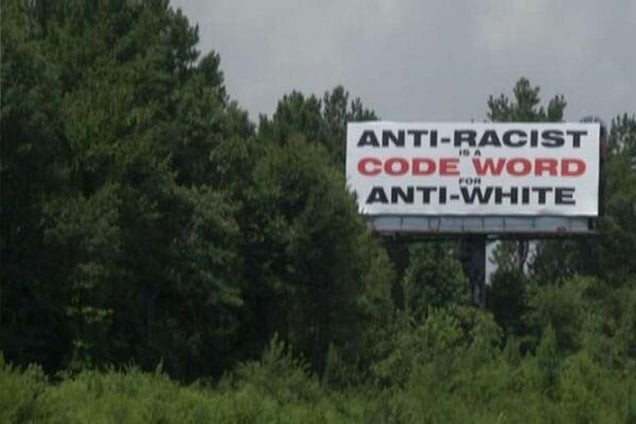 Both phrases are commonly used by the White Genocide Project, a group of white supremacist and separatist online activists. Their website refers to both slogans as “repeater phrases,” words and sentences activists are encouraged to use often.


That billboard was later revealed to have been purchased by a member of the League of the South, “a Southern nationalist organization.”

WVTM inquired with Dyar Outdoors, the company that leases the billboard space, but they refused to reveal the identity of who purchased the ad.


Previous Actor Liam Neeson: 'There Are Too Many Guns In America, It's A [Expletive] Disgrace'

Next Are You Prepared For Terrorism On The Home Front?