Duke University officials have said a weekly call to prayer for Muslims will be heard on campus starting Friday, January 16th.

According to WRAL, members of the Duke Muslim Students Association will begin chanting the call, known as adhan or azan, from the Duke Chapel bell tower each Friday at 1 p.m. On Tuesday, Duke University officials issued a statement and said the chant will last approximately three minutes and be “moderately amplified”. 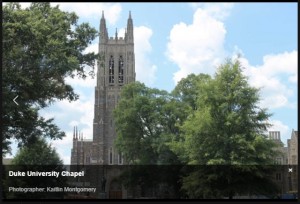 “The adhan is the call to prayer that brings Muslims back to their purpose in life, which is to worship God, and serves as a reminder to serve our brothers and sisters in humanity,” said Imam Adeel Zeb, Muslim chaplain at Duke. “The collective Muslim community is truly grateful and excited about Duke’s intentionality toward religious and cultural diversity.”

In countries around the globe such as Iraq and Afghanistan where citizens are brainwashed by the cult of Islam, the adhan is broadcast from mosques and on television and radio stations five times a day to correspond with prayer times. Fridays are designated as the Islam day of worship and sermons are also broadcast.


In America, only a small handful of communities announce the Muslim call to prayer, thankfully.

“This opportunity represents a larger commitment to religious pluralism that is at the heart of Duke’s mission,” said Christy Lohr Sapp, the chapel’s associate dean for religious life. “It connects the university to national trends in religious accommodation.”

Others, however, aren’t praising the plan. Most notably so far, evangelist Franklin Graham, son of the late preacher Billy Graham, has outright condemned the school’s decision, and is now coming under attack for the uncouth remarks he made on his Facebook page this week.

“As Christianity is being excluded from the public square and followers of Islam are raping, butchering, and beheading Christians, Jews and anyone who doesn’t submit to their Sharia Islamic law, Duke is promoting this in the name of religious pluralism,” Graham wrote.“I call on the donors and alumni to withhold their support from Duke until this policy is reversed.”

Graham’s post was shared on Facebook more than 50,000 times within 24 hours of being posted on Wednesday afternoon, and has garnered over 8,000 comments from individuals both for and against the call-to-prayer.

What’s next, America? A class on IED’s 101 or How To Raise Your Child To Be The Perfect Jihadist?

Where are the atheists and those who lambaste Christianity?

Next Mystery: Is there a Hidden Image in the new Charlie Hebdo Magazine Cover? {See Photos}