A teen that was taken into custody for a probation violation is being called a hero after helping save the life of the officer who was booking him.

According to the Sun-Sentinel, 17-year-old Jamal Rutledge was sitting handcuffed as Officer Franklin Foulks was doing paperwork when Officer Foulks suddenly collapsed.

Surveillance video shows that Rutledge reacted immediately by screaming and kicking the security fence to try to draw other officers’ attention. 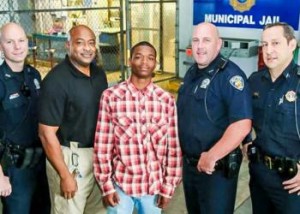 On Tuesday, Rutledge was honored by the police department for helping save Foulks’ life. Rutledge was being booked for violating parole at the time of the incident. The teenager’s reaction alerted Sgt. Todd Bunin, who contacted police dispatch. Two other officers arrived shortly after and administered CPR and used a defibrillator to restore a normal heartbeat.

A statement by the police department said, “Broward Health Medical Staff noted that Rutledge’s actions and the quick response of these officers were largely responsible for Officer Foulks surviving this medical episode.”

Officers Robert Norvis and Raymond Ketchmark, the men who performed CPR, Foulks and Rutledge will also be honored on January 21st at the Fort Lauderdale Commission Meeting.