A baby boy not older than 12 weeks has been found in a box on a staircase in an apartment block in the Russian town of Obninsk. The box was meant for a cat, who – after having found a new soul in misery, warmed up the baby and was worried to let him go.

The long-haired tabby cat named Masha has been hailed a hero after finding an abandoned baby in a street and climbing in the box he had been left in to protect him from the cold.

The furry feline has been living in the apartment block for three years, fed and petted by its residents. 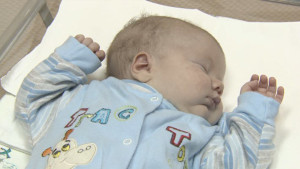 The woman, Irina Lavrova, who turned to be a nurse, said she also found a bag with baby food and diapers.

“He was well-dressed with a little hat, and whoever left him here had even left a few nappies and some baby food,” Larova said.

She found the cat and the baby after she took out the trash and heard Masha’s frantic meows.

“[Masha] is very placid and friendly, so when I heard her meowing, I thought that perhaps she had injured herself because normally she would have come and said hello to me,” she said. “You can imagine my shock when I saw her lying in a box next to a baby.”

But it was the baby’s new furry carer who was worried about the boy even after police and medics arrived. She kept close to the baby and didn’t want to let it go, the woman said.

“When an ambulance worker took the baby to bring him into the car, the cat followed him and pitifully meowed,” she shared, also saying the four-pawed adoptive mother tried to jump into the ambulance to follow the boy.

The boy was taken to a hospital, where he was declared healthy.
The cat then sat for hours on the road by the house waiting for the car to return and bring him back, neighbors said.

“Clearly [Masha’s] mothering instincts had taken over and she wanted to protect the child,” she added.

A hospital spokesperson credited the cat with the boy’s survival.

“The baby had only been outside for a few hours and, thanks to Masha and the child’s clothing, he was not damaged by the experience,” he said.

Larova said the cat is now a local hero.

“Everyone in the block is very proud of her, and we have all spoilt her rotten by giving her her favorite food,” she said.

Police are now searching for the boy’s mother.

Next [WATCH] A Mother Was Presented With An Unbelievably Difficult Decision, And Ultimately Makes The Right One