The following was written November 24, 2014. It is a thorough and comprehensive look at what the media and race mongers did not want you to know about black crime, and black crime in St. Louis, MO. specifically.

The numbers are irrefutable and paint a very different picture of St. Louis and Ferguson than the media and race mongers would have us believe. It is reprinted, unedited and with a hat tip for a job well done by Burns. 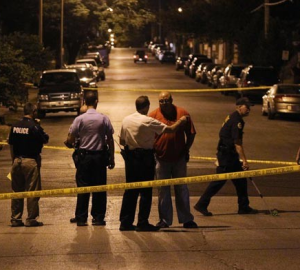 Before Ferguson exploded in reaction to the August shooting of black teen Michael Brown by police officer Darren Wilson, the St. Louis police chief raised eyebrows when he called for the use of drones to monitor high-crime areas.

The proposal was a response to  what St. Louis police authorities called “subhuman, antisocial, urban terrorist” behavior by criminals.

St. Louis also is home of the notorious “Knockout Game,” a random but racially motivated assault that has claimed at least six lives.

St. Louis is 44 percent white and 49 percent black, but statistics shows a racial imbalance in crime. Based on the city’s official crime data for 2012 — the most recent year which data are available — 97.6 percent of those arrested for murder were black and 2.4 percent were white. More than 82 percent of those arrested for serious crimes like murder, aggravated assault and larceny were black, while just 17.5 percent arrested were white.

These are just a few of the lowlights in a city on the verge of becoming, as U.S. News said, the most dangerous city in America.

However, some of the shooting victims were not outraged enough to cooperate with law enforcement. St. Louis Mayor Francis Slay described the “no snitchin’” mentality of many crime victims:

“These are disputes, and there are victims who won’t talk to the police,” the mayor said. “Trying to make an arrest isn’t that simple. In one case, they’ve got (multiple) people shot and not one of them would identify the shooter.”

Slay remarked, “In the vast majority of these cases, people are using their guns to settle their own petty feuds, and that’s really what’s very unfortunate and outrageous about this.”

Local news reported on a shooting in a housing complex involving an AK-47 in which “a black male armed with the AK-47 came around the corner [and] started shooting” at an 18-year-old woman and four of her friends.

Juanita Sparks, 60, of St. Louis told reporters, “I am tired of thugs.”

Colin Gordon, author of “Mapping Decline: St. Louis and the Fate of the American City,” calls St. Louis “the poster child of white flight.” However, middle- and upper-middle class blacks are also leaving the city in significant numbers.

The topic came up Sunday in a “Meet the Press” interview with former New York Mayor Rudy Giuliani, who pointed out that 93 percent of black murder victims are killed by other blacks.

Aside from the endemic looting in Ferguson, perhaps the most notorious crime to emerge from St. Louis is the “Knockout Game.” According to retired St. Louis Police Sgt. Don Pizzo, the game is simple and brutal: “Normally it was a group of black males, one of which would strike [the victim] as hard as he could in the face, attempting to knock him out with one punch.”

As reported by the local CBS affiliate: “The attacks fit a pattern, Pizzo recalls, black attackers on a white victim – and the victim was often an older person walking alone.”

The Knockout Game has claimed at least three lives so far. In 2011, 72-year old Hoang Nguyen was walking with his wife, Yen, when four “young people” attacked them. Yen described how one attacker pushed Hoang’s face to the side to make a “clear target for his fist.” Hoang was punched with such force that he fell and struck his head on the ground.

Then the attacker turned on Yen, 59, hitting her so hard that the punch broke her eye socket. Yen then watched helplessly as her husband was kicked repeatedly. Hoang died later that day. A young black male, 18-year-old Elex Murphy, was charged with first-degree murder.

Author Colin Flaherty has profiled the problem in his book, “‘White Girl Bleed a Lot,’” which documents racial violence, including assaulting, intimidating, stalking, threatening, vandalizing, shooting, stabbing, raping and killing, in dozens of cities across America.

It is not only civilians who are caught up in the St. Louis area violence. Ferguson protesters have adopted a new unifying chant for social justice.

In June of 2013, a planned ambush of a St. Louis police officer was the highlight of an astonishing news report about a night of violence and unusual criminal escapades.

Police Maj. Joseph Spiess was in uniform on patrol in an unmarked vehicle. He turned on his lights and siren to follow a suspicious vehicle. The driver refused to stop, and because of rules limiting police pursuits, Spiess stopped following. A short while later, a man approached his car.

“He looks me dead in the eye, lifts his pistol and starts shooting at me,” Spiess recalled.

“He looked at me square in the face, I’m in an Impala, wearing a police shirt, and he was looking me right in the eye. He knew who he was shooting at. He absolutely knew I was a policeman.”

Spiess said his attackers set up positions for an ambush.

That week, a St. Louis business owner Ahmed Dirir, 59, killed several coworkers and his business partner before killing himself. Witnesses say all involved were from Somalia and that they were family members.

In his defense, Bosley said that “most” of those he contacted “don’t have anything to do with city business.”

Bosley told the St. Louis Post-Dispatch, “Since you made such a stink out of it, I’ll return any money.”

Bosley’s son, Freeman Bosley Jr., is a former mayor who engaged in a dubious land deal.

After the Ferguson grand jury announces its decision, St. Louis may solidify its sinking reputation. St. Louis is ranked America’s No. 12 Most Miserable City by Forbes magazine. St. Louis is regularly named as among the most or the most dangerous cities in America.


Previous Democrat Rag, Politico Magazine, Wants Us To Believe Defending Yourself With a Gun Is a Myth

Next Whites Are Held To Higher Standards Than Blacks