PARA USA, the firearms company that provided guns for use in the movie “Taken 3,” is cutting all ties with the film’s star, Liam Neeson, after he made a number of fiery anti-gun comments in a recent interview. 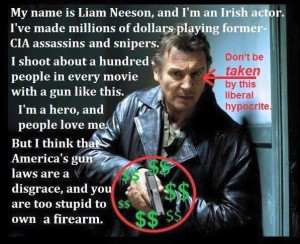 “While the film itself is entertaining, comments made by its Irish-born star during press junkets reflect a cultural and factual ignorance that undermines support of the Second Amendment and American liberties,” the company wrote in a Facebook post on Thursday.

PARA USA has also also urged its “friends and partners in Hollywood” and other gun companies to “refrain from associating our brand and products with his projects.”

“There’s too many fucking guns out there,” Neeson said in a recent interview. “Especially in America. I think the population is like, 320 million? There’s over 300 million guns. Privately owned, in America.”

He continued, “I think it’s a fucking disgrace. Every week now we’re picking up a newspaper and seeing, ‘Yet another few kids have been killed in schools.’”

Next Jane Fonda: Vietnam photo was a “huge mistake”