Monday morning December 29, as my friend and I were traveling down the Schuylkill Parkway en route to Philadelphia Airport, we observed a building on the Philadelphia skyline with a massive electronic message on it that read “happy kwanzaa.” Suffice it to say that she and I discussed the foolishness and dissociative mentality of a people who would eagerly embrace any lie in a blind desire to self-segregate and be anything but American. 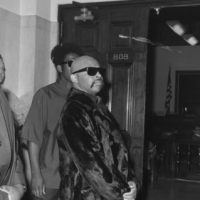 It is with that thought in mind that I repost my syndicated column titled “Fleecing the Flock.” It first appeared December 30, 2003. I’ve updated portions to include the zeitgeist of today. It is as pertinent now as it was 11 years ago. For those who have ears to hear, here is the truth of the lie known as kwanzaa.

There was a time in the recent near past that all one needed to do to bilk a church or Christian organization was to say “praise the Lord, the Lord told me …” or “the Lord has revealed to me …”

Those words, or any combination thereof, were enough to get the snake charmer the keys to the treasury. And many a church’s treasury has been pillaged through the use of such cunning.

But stealing the church’s money and attempting to steal the very souls of the congregants through subversion of the truth and distortion of facts is heretical.

Yet that is exactly what Ron N. Everett, Paul Scott and their votaries are guilty of.

Ron Everett, also known as Maulana Karenga, is the creator of Kwanzaa. Scott is a minister and founder of New Righteous Movement.

Scott’s ignominious claim to fame is his perspective of Jesus. He has been quoted as saying, “The image of a white man portraying the Messiah is more dangerous to black children than gangsta’ rap.”

Forgetting color for a moment, how can a man who says, “The Spirit of the Lord is upon me, because He hath anointed me to preach the gospel to the poor; he hath sent me to heal the broken hearted, to preach deliverance to the captives, and recovering of sight to the blind, to set at liberty them that are bruised” (Luke 4:18), be more dangerous to black children than “gangsta’ rap”?

Snoop Dogg, whose lyrics include oral sex, pimps and whores; R. Kelly arrested for allegedly having sex with underage girls and videotaping the same, including reported footage of his using a minor for bathroom practices; Ice-T, the pimp-gangster turned rapper turned actor-rapper, whose lyrics include killing cops; Suge Knight, gangster, convicted felon – these people are less dangerous than a white Jesus?

Black illegitimacy is at 70 percent and black-on-black crime numbers are frightening. In black urban communities drugs, guns, illiteracy and HIV are at staggering levels, and this “minister” is worried about the color of Jesus?

Everett invented Kwanzaa in 1966, as a black alternative to Christmas. His idea was to celebrate the end of what he considered Christmas-season exploitation of blacks.

Were his racist sensibilities offended because blacks participated in yuletide cheer, or was it that he saw an opportunity to capitalize on a bogus holiday? Kwanzaa not only has no roots in Africa, it is not celebrated anywhere in Africa. It is a complete fabrication from the mind of Everett.

Everett said, “I came up with Kwanzaa because black people in this country wouldn’t celebrate it if they knew it was American. Also, I put it around Christmas because I knew that’s when a lot of bloods would be partying.” “Bloods” is a ’60s California slang term for black people. (Paul Mulshine – Happy Kwanzaa, Dec. 24, 1999).

Businesses in America, however, celebrated it to the tune of mega-millions of dollars in Kwanzaa sales each year. So much so that the International Black Buyers and Manufacturers Expo and Conference, sent a scathing letter to firms like Hallmark Cards and Giant Food telling them to stop selling Kwanzaa-related products. The organization found the sale of Kwanzaa products by non-black enterprises “arrogantly exploitative of the culture of African people.” They found “it insulting and disrespectful to the actual spirit of Kwanzaa.”

How do they justify their actions against Everett’s words?

While I may wonder how Italians feel about black-owned stores selling spaghetti, the bigger question is Everett, himself, and how a he landed in the position he now holds.

In 1971, Everett was sentenced to one to 10 years for brutally assaulting two women followers both of whom were black. After forcing them to strip, they were beaten with an electrical cord and a karate baton. He put a hot soldering iron in the mouth and against the face of one of the women and crushed the big toe of the other woman in a vice. He then put detergent and running hoses in their mouths.

Not surprisingly, Al Sharpton, and the White House race mongers of today see nothing wrong with that behavior.

Many blacks today have the nerve to boo-hoo about slavery but with smiling faces proudly celebrate a false holiday that’s origin is as vile as that of slavery. Specific to that point, I cannot wait to see how many of these same people lose their minds over the fact that I am willing to speak this truth.

Christmas is singularly a Christian celebration commemorating the birth of Christ. All other aspects are purely perfunctory. Self-segregation – whether the work of a lost minister or Ron Everett, now a Marxist and a professor at California State University at Long Beach and the chairman of the Black Studies Department – serves only that master with that doctrinal whip.


Previous Whites Are Held To Higher Standards Than Blacks