A poster outside a Phoenix, Arizona, recruiting station was removed within hours after images of the unapproved display were posted online and sparked controversy.

The poster, which features a Special Forces patch along with Ranger, Airborne and Special Forces tabs, includes “a stock image” the command makes available for local recruiters, spokesman Brian Lepley said in an email, “but the text was changed by the local recruiting personnel” and not cleared by command headquarters. The sign read, “On a mission for both God and country”. 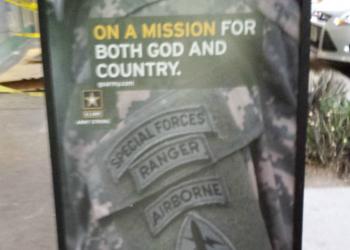 “Had the process been followed, the copy shown would not have been approved,” Lepley said.

The command first became aware of the poster Friday morning when it received questions about the display from Army Times. It was unclear when the display went up, but images of the sandwich board outside a recruiting office appear online in places like Reddit and Flickr with dates as far back as October.

It received more online attention on Thursday, when an image of the display was the center of a news release and a post on the Daily Kos website from Mikey Weinstein, president and founder of the Military Religious Freedom Foundation. In the post, which had nearly 400 comments as of Friday afternoon, Weinstein called the display a “stunning, unconstitutional disgrace” and labeled it the “Poster of Shame.”

The sign, which superimposed the message over the photo of a U.S. Special Forces arm patch, was all the more “offensive” because it directly linked religion to the military’s elite fighting forces, Weinstein argued.

“Get this U.S. Army and get it well: The United States armed forces may surely fight and kill ‘for Country’ and our legitimate national security interests,” he wrote. “But our troops do NOT fight and kill for ANYONE’S ‘God’ or related supernatural deity.”

“The Military Religious Freedom Foundation is delighted that the Constitution has been adhered to by the U.S. Army Recruiting Command,” Weinstein said after the poster was removed. “But whoever, in any way, shape or form, allowed that poster to be designed, prepared and displayed, those individuals should be aggressively investigated and very visibly punished.”
Source(s): Army Times, Daily Kos, Military Religious Freedom Foundation


Previous [VIDEO] After Being Viciously Attacked While Riding Her Bicycle, 5-Year-Old Girl Is Saved By Unlikely Hero