I know statistics indicate young blacks are 4.5 times more likely to be killed by police officers than people of other races and ages. But specific to those statistics, what no one wants to discuss, especially those who benefit most by prostituting those numbers, is that most of the blacks killed by law enforcement brought it on themselves.

I can hear the heads of race pimps and victimologists exploding because of what I just said. I know I’ll receive stupid profanity-laced mail. But the truth is still the truth. Law enforcement, and specifically street cops have nano-seconds, and sometimes less time than that to assess a situation and determine what their response should be. On the occasion that police get it wrong blacks need take a courageous and critical look at the behavior of the majority that led to the actions taken against the several.

Tangential to that is where the majority of said such shootings take place. They take place in some of the worst, most crime-infested neighborhoods in the nation. These shootings aren’t taking place in my neighborhood nor the neighborhoods my friends and colleagues live in; which I hasten to add the race pimps, media whores, and those who subscribe to “blame cops first,” very seldom if ever discuss. They reside in high crime, drug-infested, gang-controlled wastelands of the worst filth and subhuman living conditions.

No one wants to talk about the very real fact that the people in these neighborhoods hate the very police who represent the only barrier between them and their complete subjugation to the criminal elements within their environs.

Think about Cabrini-Green low income housing complex in Chicago, which drug dealing gangs had literally completely taken over. Think about how quickly the same criminal element returned to the same area when Cabrini-Green was demolished and new housing replaced it. 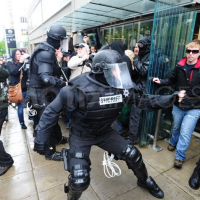 It is easy to sit in the comfort of a Capitol Hill public policy institute or in a newspaper newsroom or in network news studios or in a classroom or even in your living room, and cast judgment on law enforcement. Law enforcement is an easy target.

There are places in the cities I mentioned above that are so bad that police will not even patrol in them. The police only go in on a virtually “need to” basis. There are parts of Miami, FL that the gangs literally control the entire neighborhoods.

It is not whites who are walking through predominantly black neighborhoods indiscriminately and viciously assaulting blacks. But it is blacks who are marauding through shopping districts in Chicago and other cities assaulting shoppers, and engaging in vicious attacks on whites called “knockout.” It is black thugs marauding through shopping districts committing smash and grab, i.e., smashing store windows and merchandise counters and then stealing whatever they can grab.

And yet in the face of the examples I reference, many people still castigate the police when an officer shots one of the thugs. Many families living in the referenced neighborhoods have lost multiple children to gang violence and drug crimes. The majority of these neighborhoods have households (such as they are) headed by women.

My friends and I have stopped eating at certain storefront ethnic inner city restaurants because we value our safety more than we do some of our favorite ethnic cuisine.

The unpopular truth is that more blacks display hostile anti-societal behavior than any other groups save perhaps illegal alien gangs.

It is nothing more than an inculcated mentality of victimology that has blacks equate police officers doing their jobs as being synonymous with rogue police brutality.

Finally, more blacks are injured and shot in dealing with law enforcement specifically because they are taught to disrespect authority.

If these people want better relationships with law enforcement than it is time they started to create a zeitgeist wherein same can exist.


Previous Fleecing the Flock – The Truth About the Lie of Kwanzaa

Next What Did The Youth of Ferguson Learn?