I and millions of other Americans flocked to theaters over the weekend and embraced Clint Eastwood’s latest silver-screen masterpiece “American Sniper”. However, there are some in Hollywood who have condemned the film – accusing director Clint Eastwood of “celebrating a killer.”

Unsurprisingly, the fat bastard known as Michael Moore and the douche bag known as Seth Rogen are two of them. 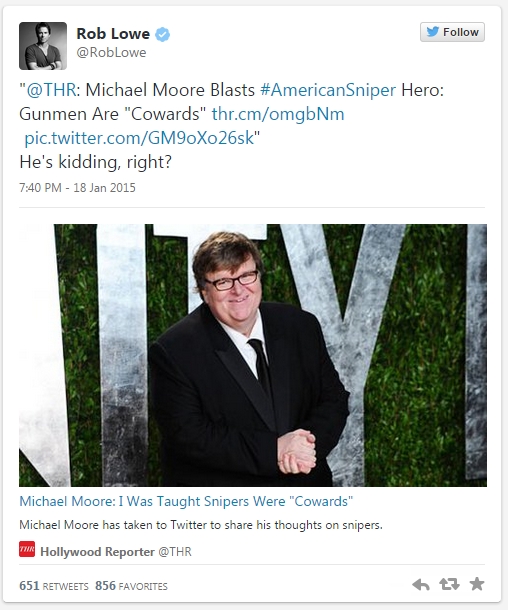 Fox News’ Todd Starnes sounded off Monday on filmmaker Michael Moore and actor Seth Rogen, who both spoke unfavorably of the film celebrating the life of Navy Seal Chris Kyle.

“Michael Moore tweeted that snipers like Chris Kyle are cowards. Seth Rogen – who made his mark with movies about sexually frustrated pot heads – compared Kyle’s bio-pic to a Nazi propaganda film,” Starnes said. “Here is the sum and substance, folks.  Chris Kyle killed bad guys so that good guys could live.”


“The Interview” star Seth Rogan also took to Twitter to criticize “Sniper” for what he seemed to characterize as a pro-war stance. He compared the Bradley Cooper-starring movie to a scene in Quentin Tarantino’s “Inglourious Basterds” where a German sniper “heroically” killed more than 200 Allied soldiers.

Watch Todd’s full “American Dispatch” in the video below.

These scumbags should be grateful that men like the late Chris Kyle put their lives on the line to rid the world of terrorist scum across the pond lest they carry out their horrific acts of violence on American soil.

Todd Starnes is host of Fox News & Commentary, heard on hundreds of radio stations. Sign up for his American Dispatch newsletter, be sure to join hisFacebook page, and follow him on Twitter. His latest book is “God Less America.”

Next Company That Provided Guns for ‘Taken 3′, PARA-USA, Cuts All Ties With Liam Neeson After Anti-Gun Remarks