After the dust settles and the last embers slowly smolder to an end, what will be left in Ferguson, MO? What will the children think when they walk by the pile of ashes that used to be Little Caesars Pizza? What will the families who need prescriptions filled for diabetes or for their child’s illness do now that the Ferguson, MO. Walgreens has been burned to the ground? 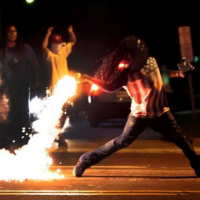 What will the young people who had part-time jobs at one of the stores that no longer exists do for pocket money now? What will the people who depended on the corner grocer do now for groceries? What about the jobs in toto that no longer exist? How will the children of Ferguson view what happened? How will the looting, rioting, violence, and race mongering be understood by the young people of Ferguson?

These are questions that aren’t being addressed. The race mongers aided and abetted by the cultural Marxists masquerading as journalists and objective reporters do not give a rat’s tail about the emotional scars and damage done to the young people and children of Ferguson.

It cannot be stated often enough; children are the future of tomorrow. What they learn and internalize as acceptable behavior today will dictate how they behave tomorrow.

Did the rioters, looters, Sharpton, and Obama teach the children and young people of Ferguson the value of propriety, self-control, decency, and Christ-centered behavior? Did they learn that self-destruction is a foolish political strategy? Are they being taught that such behavior is a violation of purpose that oftentimes results in dire consequences?

This is a learning opportunity but it isn’t being treated as same. If I were an elected official from Ferguson or a member of the clergy of Ferguson, I would work to address the questions I proffered with the children and young people. But I am not and that isn’t going to happen.

Actions have consequences and let there be no doubt that children and young people today are well aware of same. This is particularly true of black youth. Often they address life in terms of finality. For instance, young blacks are much more likely to say they don’t expect to live to 30 years of age than their non-black counterparts. Young blacks are much more likely to address their life in terms of violence and anti-social behavior. This isn’t by accident. They become what they see. Their social environment is 70 percent that of single parent homes, violence, drugs, generational incarceration, taking what they see and want juxtaposed to working and saving for same. Their social structure consists of inculcated animus for themselves and modernity – albeit they would be loathe to admit it.

The travesty of Ferguson is not just the rioting, looting, rape, violence, ad nauseum; it is the inculcation of same as cultural and acceptable.

The young people and children of Ferguson will not be taught that Michael Brown lost his life because he behaved in a way that was contrary to a long and fulfilling life. They aren’t being taught that strong-arming items from convenience stores and battering police can have deadly consequences.

They are not taught that Michael Brown’s life wasn’t stolen by a rogue police officer. Michael Brown lost his life because he voluntarily made bad decisions.

But children are wonderfully intuitive. Most children have an innate sense of right and wrong, but when that which is wrong is what they are rewarded and/or receive applause for can there be any wonder why so many black children turn out as they do?

The truth may not be popular but it is still the truth. Children need not be raised in the lap of wealth and privilege to become assets to their neighborhoods and their country. But, with rare exception they do need to be brought up to respect themselves and to respect others, and yes, that includes law enforcement.

If Michael Brown were as smart as his mother would now have us believe, why didn’t he understand that strong-arming merchandise from a store and pummeling persons in the store in the process was wrong? Why didn’t he realize that illegal drugs were just that, “illegal?” If he were so smart, why didn’t he understand that smashing a police officer in the face hard enough to nearly cause the officer’s eye to pop out of his eye socket and bull-rushing the officer was behavior associated with bad outcomes?

Brown didn’t grasp that because he was raised and inculcated by his surroundings not to. He was raised to have disrespect for himself and those around him. Brown didn’t get out of bed that fateful day and decide it was the day he was going to go gangster. Rather it was the day that he paid the ultimate price for having made said decision long before that day.

Is it really so unfortunate or is it the anticipated end to the life of a young man who was raised to live without boundaries? What will the lives of those children and young people now living in Ferguson be like a year from now or two years from now.

I say, probably not much different than Michael Brown’s, unless they are taught a different message.