A homeowners’ association has filed a lawsuit seeking to bar a resident in the town of Manlius from parking his own pickup truck in his driveway.

The Kimry Moor Homeowners Association has filed a lawsuit against residents David and Arna Orlando in Onondaga County Supreme Court because they are parking their 2014 black Ford 150 pickup in their driveway at 511 Kimry Moor, just outside the village of Fayetteville. 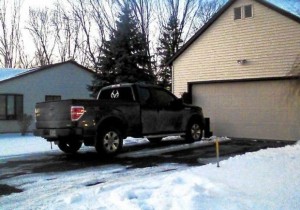 The association wants an injunction to stop the couple from parking their pickup in the driveway of their home.

The association cites its regulations, which limits parking in driveways only to “private, passenger-type, pleasure automobiles,” according to the lawsuit. The association owns all the driveways in the development, according to court filings. The Orlandos could park their pickup in their garage, but not in their driveway.

Paul Curtin, who represents the Kimry Moor Homeowners Association, said the pickup “is not a passenger vehicle by definition.” He added that the homeowners do not own their driveways and must abide by the rules. Other rules adopted by Kimry Moor include no parking of boats and trailers, no tents or shacks and no unusual noise or odors.