In this AP report, Missouri elected tried to put pressure on the Ferguson Police Chief to resign after the riots and devastation. It didn’t take long for the political parasites to circle the wagons around Chief Jackson when looking for a target on which to lay blame. But that’s not the story, here. 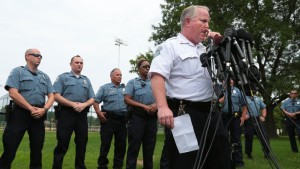 As we all watched the days of rioting and destruction, the most asked question, across the region of St. Louis, and across the country? “Where’s the National Guard? Why isn’t the National Guard in Ferguson?” As we knew before the grand jury verdict was released, MO Governor, Jay Nixon, had them on standby in anticipation of violent reactions after the announcement of the verdict. They were here, waiting, and watching the city burn to the ground, with the rest of us. We still don’t know why, but we do know there was a deliberate stand down order. The next most asked question, WHY?

So, back to the AP story. While the AP chose to focus on the targeted attack on Chief Jackson, in this ABC News story, buried on page two, at the end, it just manages to mention an email obtained through FOIA requests that note Nixon’s order to not deploy the guard.

The email also made reference to a request to Gov. Jay Nixon to place the National Guard in front of Ferguson police headquarters on the date of the grand jury announcement. “Apparently the guard will not move to the FPD per the governor,” the email said.