A reported private meeting has taken place between two possible presidential candidates this past Thursday between Mitt Romney and Jeb Bush.  The two met together in Utah engaging in a one-on-one  meeting that a  Bush spokesperson has confirmed.  The two republicans are both enthusiastically exploring the potentiality of running in the 2016 presidential race. Romney has openly expressed the possibility of a third Presidential run. .

However, Bush spokeswoman Kristy Campbell told MSNBC News in an e-mail, “The meeting has long been planned, Governor Bush looks forward to visiting with Governor Romney.”

Many were taken aback when Romney announced two weeks ago that he was considering a third bid at the White House, which may be a reason for the two to meet before the frenzy of campaigning begins.  As one Romney advisor clarified, “they’re not best buddies, but they have great respect for each other.” 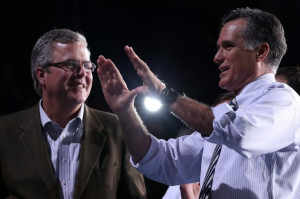 Bush and Romney who have strong supporters on both sides could theoretically be discussing the potential divide within the republican establishment; if New Jersey’s Governor Chris Christie should decide to toss his hat into the ring as well.


Republican strategist Ron Bonjean as reported by Reuters states, “I’d say this is a highly unusual move, the fact that they are meeting is significant because it could lead to some decisions on the future of their candidacies.”

With Romney now openly discussing his possible run it could become quite the race to watch since there are many other 2016 presidential hopefuls.  Florida Senator Marco Rubio, previous Arkansas Governor Mike Huckabee and as mentioned before New Jersey Governor Chris Christie have all expressed interest as well.

Romney currently has held a lead over the other likely republican candidates in polls that have been conducted and showing Bush coming in at a distant second. In a recent Washington Post/ABC poll that was conducted on Thursday it showed that both men were trailing behind Clinton, with Bush 54-41 and Romney 55-40.

The question on most republican voters minds is how would Romney or Bush stand up to a strong democratic front runner such as Hillary Clinton in a general election? Only will time will be able to answer that question.


Previous Ted Nugent Says You Can't Do This In France