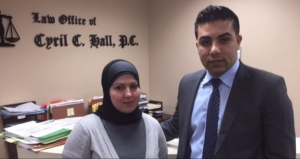 Malak Kazan, 27, of Dearborn Heights was pulled over by police and arrested for having a suspended license. While she was being booked, she was forced to remove her hijab. She was told she could not wear the head scarf while being processed and while in custody.

Muslim women must wear their hijab in public and in front of men who are not closely related to her. Because Kazan was forced to remove her head scarf, she feels she was humiliated and violated.

In forcing Kazan to remove her head scarf, she claims that the police department violated her right to religious freedom. ABC 7 reports:


“The main issue here is that my client’s constitutional rights, her religious liberties, can’t be stripped at the jailhouse door. She has an absolute right to maintain her faith,” Kazan’s attorney Amir Makled said. “We hope this cause of action will bring to light a policy that is dated and needs to be amended. … We also hope to get some further diversity training for officers in the city. Hopefully this will be a learning experience for other law enforcement agencies.”