The family of Michael Brown, the unarmed teen killed by a police officer in Ferguson, Missouri this summer, is considering suing the police officer who shot him, as well as the police department, for wrongful death.

With the Department of Justice all but admitting former Ferguson Police Officer Darren Wilson will not face federal civil rights charges for Brown’s August death and the grand jury’s decision not to indict the shooter, Brown’s relatives could turn to a lawsuit for justice. It is likely the only avenue of recourse still open to them. 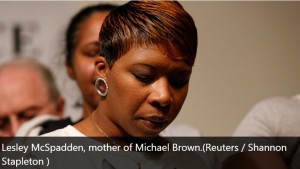 The teen’s death kicked off months of protests across the country against police brutality and racism. Several days of rioting occurred in Ferguson after Prosecutor Robert McCulloch announced the grand jury’s ruling in November.

Anthony Gray, an attorney representing the Brown family, confirmed to the Guardian that the family is considering a civil suit against Wilson.

Legal experts do expect Brown’s family to file a civil lawsuit against Wilson and the Ferguson Police Department, CNN reported.

“There might be a lot of political forces that would be at work that would give the Brown family a chance at a quick settlement,” New York lawyer and former prosecutor Paul Callan told Reuters.