They are according to the Sydney Morning Herald. SMH and Newser.com reported CriSTAL, a Sydney research group developed a 29 point plan to determine the viability of elderly patients in Australian hospitals and now the system has made it way to the U.S.

Being admitted via emergency hospitalization (within 1 year), OR Meets 2 or more of the following deterioration criteria: Systolic blood pressure greater than 90 mmHg, Respiratory rate less than 5, greater than 30, or a pulse rate less than 40 or greater tan 140, a need for oxygen therapy, repeated or prolonged seizures, low urinary output, advanced malignancy, kidney disease, chronic heart failure, weakness, slow walking speed, cognitive impairment, nursing home resident, or Self-reported exhaustion (felt that everything was an effort or felt could not get going at least 3 days in the past week), just to name a few. 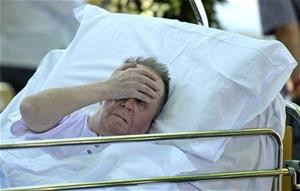 Medical care now includes questioning whether the cost of medical care is “worth it” on questionably viable patients. Would you want your doctor mandated to such a list? Would you be inclined to go to a hospital for medical care if you knew they were?

Next [WATCH] Teacher Confiscates Phone From Student, Then The Unthinkable Happens