A Jihadist ISIS leader is calling for all women, ages 11 to 46, to submit to female circumcision, Female Genital Mutilation.

The United Nations second-in-command in Iraq, Jacqueline Badcock, speaking from the Kurdish provincial capital of Irbil, told reporters during a videoconference organized in Geneva that Islamists in control of the Iraqi city of Mosul had issued a fatwa or edict asking all families around Iraq’s northern city of Mosul to circumcise daughters within the specified ages or face severe punishment.

Abu Bakr al-Baghdadi ordered the fatwa for women to “distance them from debauchery and immorality.” according to International Business Times. 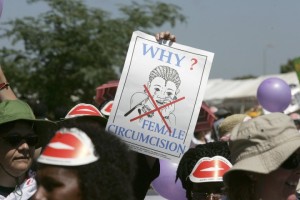 The United Nations has spoken out against the fatwa:

FGM or the ritual cutting of girls’ and women’s’ genitalia is widely practised across large swathes of Africa, the Middle East and Asia. The practice has come in for strong criticism, not just from the United Nations, but also human rights and women’s rights groups.

In 2012, the United Nations General Assembly passed a resolution calling on all states to ban the practice but despite widespread condemnation, women in a number of countries have continued to suffer this barbaric practice.


Previous [VIDEO] Grandmother, 89, Given Weeks to Live Pleads "I'm Starving" As She Begs For Food On Camera

Next DEVELOPING: Army Sgt. Bowe Bergdahl to Be Charged for Desertion [VIDEO]