A Texas man who posted a status update on Facebook which taunted police in a roundabout way is probably wishing he hadn’t been so cavalier.

After Eddie Smith of Mineral Wells, Texas, announced that he had more than a dozen warrants out for his arrest, the 22-year-old was arrested on Jan. 26.

The status, which reads “So, I have 16 warrants out right now. Lol they know where I’m at tho so, it must not be TOO bad,” was posted onto Smith’s Facebook page on Jan. 20. 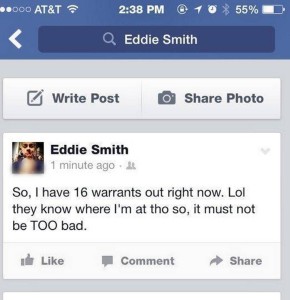 Smith must have forgotten that his status updates were viewable by the public because after he posted the revealing message, someone contacted the Mineral Wells Police Officers’ Association and tipped them off regarding his outstanding warrants. Authorities soon discovered that Smith did indeed have 14 warrants out for his arrest.

“We got to digging, came up with a good address and we went out and paid him a visit,” Detective Nick Wells told Star-Telegram. “It’s one of those things where you can poke fun at a lot of things. Don’t poke fun at us. We’ll take care of it.”

Smith was unable to pay his fines or make bail, so a judge ordered him to serve 51 days in jail.  As of Jan. 26, he was being held in the Palo Pinto County Jail.

His warrants “ranged from traffic citations like an expired inspection sticker and no insurance to petty theft and totaled more than $1,200 in fines,” according to the newspaper.

Despite being mocked openly on social media, Police Chief Dean Sullivan said he welcomed the bragging.

“The NFL calls it ‘unsportsmanlike conduct — excessive celebration,’ a 15-yard penalty,” Sullivan told reporters. “We’ll just call it ‘genius’ and leave it at that.”