Sherri Norman was driving on Randleman Road Saturday morning, heading out of Randleman, when she turned on her dashboard cam.

The video shows Norman driving behind a tan SUV, which periodically stops in the middle of the road for no reason and swerves erratically. Norman can be heard saying, “This person in front of me is being a real character right now.” 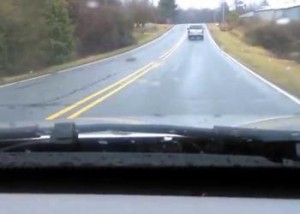 After a while, the SUV pulls to a stop and a woman climbs out, yelling profanities while she approaches Norman’s car. The passenger starts crying while Norman closes her window to protect herself from the other driver.

Norman described the incident, saying: “Twice the lady tried to pass me on a two-lane road with double lines on a hill. She about ran me off road first time. She got behind me a second time and then went to go around again. I let her have the road, called 911, reported her and her plate number… I started phone video which was in a holder on dashboard — hands free.”

Norman gave a copy of the video to police and they were able to identify the driver as Kristin Leigh Phillips, 40, using the license plate number.


She was arrested and charged with reckless driving to endanger, assault and battery, injury to personal property, driving left of center and two counts of communicating threats.

Next Romney Drops Out, Bush Front Runner In 2016