Call it dumb luck or being in the right place at the right time, but Zach Norris has experienced what every bargain hunter and thrift shop enthusiast dreams of – finding a gem with an insanely cheap price tag.

Norris visited a Goodwill in Phoenix, Arizona, in search of a used push-pull golf cart. While he was searching, he began to browse the collection of watches the store had on display. One of the watches caught his eye and although it was laying face down, the could said the label which read “LeCoultre Deep Sea Alarm” and had a price tag of only $5.99. 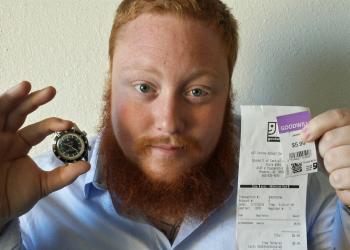 Norris, being the timepieces aficionado that he is, recognized the watch as being made by Jaeger-LeCoultre and knew it had to be worth more than the price tag affixed to it. What he didn’t know was the LeCoultre Deep Sea Alarm series was made circa 1959 and is valued at more than $35,000.

Fewer than 1,000 of the watches were made for the American market and it was among the first dive watches ever made which featured and alarm. Though the vintage timepiece had minor damage and discoloration, the authenticity of watch was verified by an authorized Jaeger-LeCoultre retailer, Oliver Smith Jeweler in Scottsdale, Arizona.

With the exception of the 4 o’clock time crown being replaced, the watch still has most of its original parts.

The watch had only been put up for sale a day earlier and Norris happened to to be the patron with a sharp eye to find the diamond in the rough. Although he didn’t find the golf cart that he was hoping to find, he was able to sell the watch to a fellow enthusiast and noted Rolex dealer, Eric Ku.

Norris said he plans to use the proceeds to buy an Omega Speedmaster professional and use the remaining funds for his upcoming wedding.

Next Officer Receives Call Over Shoplifter, And Decides Not to Arrest Him When He Finds Out What He's Stealing