A woman who was genetically born a man –  and told she would never conceive – has been pictured at home with the twin girls she gave birth to.

Hayley Haynes, 28, was born without a womb, ovaries or fallopian tubes. At 19, doctors told her she had XY chromosomes which genetically makes her male and that she would never conceive. She was diagnosed with Androgen Insensitivity Syndrome.

“When they told me I had no womb I was so confused I felt sick. My biggest fear was never having children,” Haynes said. “Suddenly a huge piece of my life was missing. I felt like half a woman and was embarrassed. How I was going to tell a guy I was genetically male when I started dating?”

Haynes’ best friend Sam, who had been her closest source of comfort throughout the ordeal, remembered the day she told him how she felt she’d never be able to find a man who would want to be with her.


“She told me no man would want her. I told her that any man worth having would,” he said. “At the time I said it as a friend — it’s quite romantic that man turned out to be me.”

As time progressed, their friendship blossomed into something more and they began dating shortly after her 22nd birthday. Meanwhile, Haynes’ doctor discovered a small womb inside of her, and was beginning to feel confident that it would eventually grow. “He was optimistic it would grow. I still couldn’t conceive naturally but I could have the option of IVF,” she said.

Haynes began taking hormones, which her doctor believed would eventually allow her to conceive via IVF. Her relationship with Sam continued to grow as her condition improved.

“He’s been my confidant from day one and so supportive. I was worried any man would run a mile,” she said. “But with Sam I felt accepted and loved for who I was. But we still didn’t know if we would ever have children. We both wanted a family, but we just had to wait and see if the treatment worked.”

In 2011, Haynes was told that she was ready to try IVF. She was dealt a blow, however, when her local NHS (National Health Service) told her that she and Sam would not receive funding for fertilization.

“First I found I couldn’t have children, then I was told I could. Now they were denying us the help we needed. Although adopting was an option, we wanted the baby to be as close to ­biologically ours as possible by using an anonymous egg donor and Sam’s sperm,” Haynes said.

After spending half of their savings to fund IVF treatment at a clinic in Cyprus, the couple flew 2,000 miles and began their journey to conceive. After a lengthy stay, Haynes took a pregnancy test and discovered that she was finally pregnant.

“I peered at the test and it said positive. I couldn’t contain my happiness,” she said. “I was jumping up and down and screaming, but Sam kept his cool and made sure we took another test before we celebrated.” 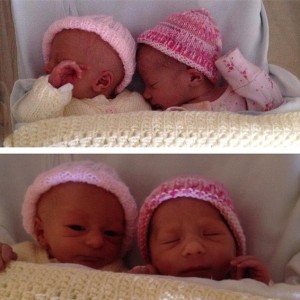 Soon thereafter, she and Sam learned that they were having twins, and on Christmas Eve, Haynes gave birth to two healthy baby girls.

“Becoming a mother was the single most amazing moment of my life. When I held the babies in my arms for the first time I was overwhelmed,” Haynes said. “I had spent nine years coming to terms with the fact this might never happen, but in that moment all the pain just washed away.

“Darcey and Avery are the most beautiful little girls in the world. Even now, I can’t separate Sam from the girls because he loves them so much,” she continued. “We’ve spent so much on these babies. It’s not just our wallets that are empty. We are emotionally exhausted. But I’d do it again in a heartbeat for one cuddle with my girls.”

Next [WATCH] This Is Why Road Rage Is A Really, Really Bad Idea And You Should Stay In Your Car