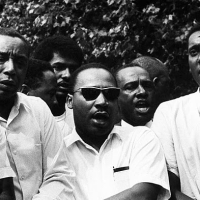 With the ever present cacophony of shrill orthopterans – who pervert Martin Luther King’s call for the same unencumbered opportunity for blacks as for whites to one of lowered expectations without accountability – it is only fair to compare what he said juxtaposed to the reality of today.

Forty years later, the polar opposite is the case. It is not police with fire hoses and dogs who bring misery and death, rather it is the vicious crimes perpetrated by blacks against other blacks who are trapped in multigenerational wastelands of self-imposed poverty.

“Today it is not the Klan riding through our neighborhoods killing our men and raping our women. It is our own neighbors depriving us of our civil rights, and it is our own leaders who seem preoccupied with blaming cops, the system and everyone else.” (Jerry Oliver, chief of police, Richmond, Va., Aug. 27, 2000)

But today, when I say that blacks are worse off morally and spiritually than at any time in their American history, ignorant and socially uneducated racialists choose to deny the factuality of my words.

Today in Philadelphia, Miss., a bustling community of 7,300, the president of the Board of Supervisors is black, as is the fire chief and alderman. There are black administrators, teachers, police officers and professionals. King died too soon.

In 1960, Dr. King said: “Only 7.8 percent of the Negro students in the South are attending integrated schools this year, a hundred years after our emancipation from slavery. At this pace it will take 92 more years to integrate the public schools of the South.” Dr. King did not live long enough to see the inclusion of blacks into every facet of the educational landscape.

A question: How long will it now take for black students to end the detestable practice of self segregation? An observation: How misguided the black student who accepts the idea that striving for academic excellence is to be equated with being “white,” when in actuality it is equipping oneself with the best possible chance for economic success. I believe King would have told them to look in the mirror – for it is there they will find the man most responsible for their ills.

“We must have freedom now. We must have the right to vote. We must have equal protection of the law,”said Dr. King after a march on the Alabama state capitol. Yet today – despite unparalleled advancement – the Congressional Black Caucus, the NAACP, the Jacksons and Sharptons, et al. would tell us that America is fundamentally flawed, that it purposefully excludes great numbers of blacks because of their color. But questions need answering before one accepts their premise.
First, if blacks are being excluded, how does one reconcile the litany of blacks participating in every aspect of America’s opportunities? How do they substantiate their claims of exclusion and racism, when they themselves live in gated communities and gilded townhouses, while sending their children to the most elite private academies and universities? Was it white racists who mimicked Justice Janice Rogers Brown? Is it white racists who are teaching children to hate Justice Clarence Thomas or parody National Security Adviser Condoleezza Rice? Point out the white person who publicly called Secretary of State Colin Powell a house slave.

Today the self-segregation of blacks sends an unambiguous message of self-centered contempt, not a message of common goals and concerns. It is the shameful and senseless practice of heterotypicism of blacks – spurred on by their false prophets, who view those so inclined with necrophagous glee. When combined with poor academic skills, poor – if any – marketable abilities and an abject absence of sound biblical teaching, one can understand why so many in the urban environs are misguided and angry.

King said, “Segregation not only harms one physically, but injures one spiritually. It scars the soul; it is a system which forever stares the segregated in the face, saying ‘you are less than …’ ‘You are not equal to …’”

But why would Al Sharpton, the Congressional Black Caucus, NAACP, et al. change their message? After all, private clubs, schools and salons – in brief, their lifestyles as a whole – are not getting any cheaper. If they correct their message, they will lose their meal ticket … and they cannot afford to have that happen.


Previous Militias On The Rise

Next Obama Versus America