Richard Suter, 64, reportedly put his car in drive instead of reverse while under the influence of alcohol at a local restaurant. He then drove through the restaurant patio and hit toddler Geo Mounsef, who became pinned underneath his car and later died at the hospital.

Now, he’s claiming that he was recently abducted and assaulted by three men in a “revenge attack.”

Suter, who will soon face trial for Mounsef’s death, says he was in his home last Thursday when, at around 11 p.m., three men broke in and abducted him. “You know what this is about,” the men reportedly said to him. They brought Suter to a pickup truck waiting on the street, put a bag over his head and drove him to a field outside of the city. According to reports, the men then cut off his left thumb with garden shears, beat him and left him unconscious.

“I must have passed out before they started beating on my face, because the next thing I woke up alone in a rural setting,” Suter said. “I just had my bathrobe on and some snow boots.” A passing car then spotted Suter, picked him up and called 911.


Suter said he believes the men who assaulted him were “professional criminals.”

The abduction comes after Suter’s wife was assaulted in a parking lot shortly after Mounsef’s death. Suter said he is unsure whether the two incidents are related.

“I’m confused … we’re just in the dark why this happened,” he said. “I don’t know where this started, when it’s going to end. It’s pretty unreal. I hope they catch these guys.” 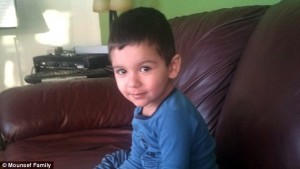 On Friday, Mounsef’s mother responded to Suter’s abduction in a statement posted on Facebook.

“Justice For Geo will not come in the form of violence. Our family remains hopeful and entrusting of the legal system to bring Justice For Geo,” Sage Morin wrote.

“It is utterly heartbreaking to have our baby Geo’s memory associated with this horrible act of violence,” Morin added. “We will continue to spread love and kindness in Geo’s honour [sic] as we prepare for the upcoming trial.”