An article was recently published by The Detroit Free Press about James Robertson, 56, a resident who has been walking eight miles to work and then 13 miles home every weekday.

Robertson’s Honda broke down about ten years ago and being short on funds, he had no other option but to walk to work each day. As time progressed, his commute became increasingly difficult as the Detroit public transportation system wavered and his employer moved further into the suburbs.

Blake Pollock, a local banker, saw Robertson making his daily commute many times before finally offering him a ride.

While Pollock consistently gave Robertson rides to and from work, he said it was a first for him. “I’ve never picked up a hitchhiker in my life. I don’t really think I did anything all that amazing. I was curious,”  he said. The men quickly became good friends.

A local dealership heard about Robertson’s plight and donated a 2015 Ford Taurus. A local college student also started a GoFundMe page that raised over $300,000 in a matter of days. ABC’s World News Tonight will also be crowning him as “Person of the Week.”

The 56-year-old Robertson will be featured on the show alongside Blake Pollock, a banker who notified the Detroit Free Press about his story, and Evan Leedy, 19, the Wayne State University student who started the GoFundMe page. 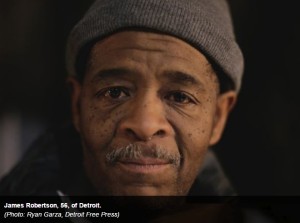 Pollock told the Detroit Free Press, “Putting a car in his driveway and just handing James the keys or filling his pockets with cash is not the answer. But with these resources now, we should be able to do something very positive for the guy.” Pollock is a vice president at UBS.

Michael Ford, CEO of the Regional Transit Authority, told the Detroit Free Press, “That story is heartbreaking and it’s not necessary. There’s more that we can do.”

While Robertson’s commute will be considerably shorter, he now has other things to worry about. Pollock is worried about Robertson’s safety because he lives in a very poor part of Detroit and has tried to arrange some kind of security for Robertson.

With that kind of money, Robertson may be able to move to a better part of town and now Pollock is looking out for Robertson’s financial situation.

Next [NSFW] Jennifer Lawrence Has More Nude Photos, And This Time They're On Purpose