During the end of her senior year of high school in Anchorage, Alaska, Kaleena Pysher, 19, learned she was having a baby. Pysher knew she couldn’t give her baby everything that she would need and while others in her situation would have decided on other options, Pysher chose life for her unborn child.

“When I first found out that I was pregnant, I knew I didn’t have the life experience to raise a baby, and I wasn’t going to be selfish… So, I decided for adoption,” said Pysher.

It wasn’t long until she learned that a friend of the family was looking to adopt. However, Pysher wanted to remain very much in her baby’s life.

While in her fourth month of pregnancy, she contacted the adoptive family to begin the process. Pysher began speaking with the family on a daily basis and they soon became close as she would send them pictures of her ultrasounds and keep the family up to date on the baby’s health and everyday movements.

“I would tell them, ‘Oh, she has the hiccups today,’ or ‘She’s moving around a lot today.’ Stuff like that.”

During her seventh month of pregnancy she made the decision to breastfeed her newborn, named Raylie, and then continue breast-feeding by pumping milk and sending it to the adoptive family. 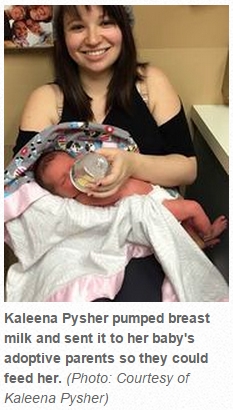 still needs me for food,’ and in that way I felt very connected to her, and like the adoptive parents still needed me.”

According to First Coast News, research has proven that breastfeeding is much healthier for an infant than formula, which Pysher understood after speaking with a nurse at the hospital. Once again showing her selflessness, Pysher said: “When a baby is fed breast milk, they are just way ahead of the game. I decided that I wanted my baby to have the best options and be able to grow – and so, I knew I was going to pump and give her that benefit.”

After pumping, Pysher puts the milk into freezer bags and then sends them to the adoptive family, who pay all the shipping costs. The family actually told Pysher that they don’t need more milk, so she is donating the leftover supply to a milk bank in Colorado, who will test it and then send it to babies in intensive care units throughout the country.

Now, Pysher is off the breast pump but still remains very close with her baby and adoptive family.

“They have told me that we are a family now,” Pysher said. “They said that I will always be her mother, and that they are appreciative of the gift of life I have given them.”

Next An Unlikely Hero Saves Pregnant Woman From Violent Attack