Jim Holt, a Canadian military veteran, is dying with stage 4 cancer after having spent 28 years in the Royal Canadian Air Force as a lieutenant colonel and then spent an additional 20 years as a foreign affairs officer.

According to The Blaze, the veteran found himself in the hospital after a broken vertebrae tragically turned out to be the result of Stage 4 cancer. He moved back to Canada with his wife after spending 12 years in Italy and Argentina to receive treatment at the Ottawa Hospital.

However, because he resided in the foreign countries, he “had to apply for Ontario Health Insurance (OHIP) when he came back to Canada for treatment,” which has a three-month eligibility wait period, according to the Ottawa Citizen. This resulted in the vet being uninsured for months, racking up a hospital bill in the amount of $61,000

The 79-year-old believed he would have to pass the bill on to his family but little did he know, the Ottawa Hospital wasn’t going to let that happen. 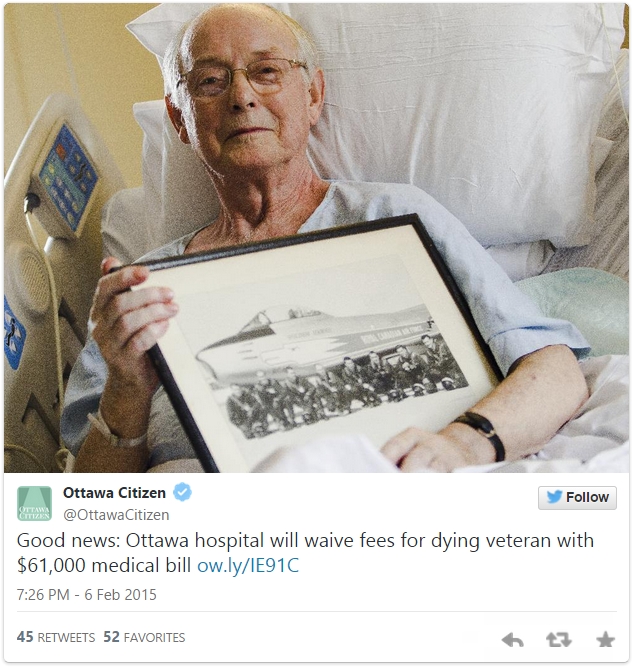 Holt was shocked when he found out that his family would not have to bear the burden of paying off debt that his insurance wouldn’t cover. Holt’s daughter Caroline told The Ottawa Citizen that she received the news while live on the radio talking about the situation her father found himself in with his insurance company.

“My father was in tears,” Caroline recalled. “He said, ‘Somebody finally listened.’”

Thankfully, the hospital decided to work with the insurance company and make sure that the man’s bills were paid, allowing him to now rest easy knowing that his family won’t have to worry about the bill.

“The hospital recognizes the financial challenges faced by uninsured patients who are not covered under a provincial or federal health plan and require non-urgent medical care,” Nathalie Cadieux, the hospital’s vice president of finance, wrote in an email to Holt’s daughter Caroline. “We review such cases on compassionate grounds and try to alleviate unmanageable financial burdens on families as a result of receiving necessary medical care following an illness or injury.”


Previous NO HONOR AMONG TERRORISTS: ISIS Suffers Financial Blow After Being Robbed By One of Their Own

Next [WATCH] When This Man Tried To Kick A Dog, This Is What Happened