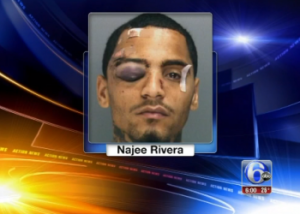 Two Philadelphia police officers are being charged with the assault of a man in May 2013 that was caught on surveillance and reporting a false account of the incident.

A surveillance video (below) of the incident appears to show a police car crashing into Najee Rivera, who was riding on a motor scooter.

Williams claims the officers told the Philadelphia Police Department that Rivera was injured because he fell off his scooter. The officers allegedly claimed that Rivera tried to grab a police baton, so one of the cops struck him in the face.

“He never resisted. He never struck them. He never fought back. They just started hitting him,” said Williams.

The police department failed to track down the video and allowed criminal charges – resisting arrest and aggravated assault – to be pressed against Rivera.

Those charges were only dropped because Rivera’s girlfriend worked to obtain the surveillance video from a nearby store.

Officers Robinson and McKnight have been suspended for 30 days in the first step of a termination process.

“It is painful, it is embarrassing, it does bring a lot of issues that you see across the country,” Commissioner Ramsey told reporters. “But sometimes in order to get healed, you have to withstand a little bit of pain.”

Rivera suffered a fractured orbital bone and numerous lacerations on his face; Commissioner Ramsey was not injured.