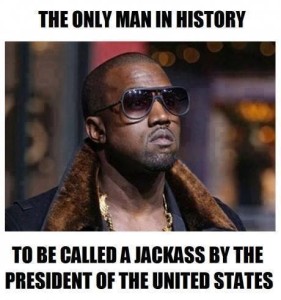 I must admit, that I’d pay good money to see someone beat the piss out of the self absorbed jackass known as Kanye West and here’s why.

Regardless of how good a record Beck‘s Morning Phase is, it’s clear that the biggest upset at the 2015 Grammys was his beating out Beyoncé for “Album of the Year.”

Things got a little weird when Beck won the coveted prize, stunning nearly everyone in the room and causing Kanye West to jokingly reprise his infamous Taylor Swift “I’ma let you finish” moment by hopping on-stage just as the folk-rock musician accepted his awards.

But then he smiled and walked off, even though Beck invited him back up. So there goes that.

Watch the moment below in Vine form:

And, of course, the follow-up, in which Kanye declares Beck should’ve handed over the award out of respect for artistry:

Previous These Two Sheriff’s Deputies Thought nothing of Their Own Lives, Caught on Body Cams