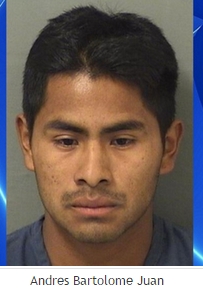 A man who was arrested on charges of sexual assault for sexually assaulting a girl twice, told police that it was the girl’s fault, police in Florida said.

Palm Beach County Police said that they arrested 23-year-old Andres Bartolome Juan of Lake Worth, after sexually assaulting the 6-year-old girl in the laundry room of an apartment complex.

While being questioned by detectives, Juan admitted to assaulting the girl twice, but added that the girl was at fault. Juan was charged with two counts of sexual assault by someone 18 years or more against a victim 12 years or less.

According to the Sun Sentinel, the girl told detectives that she was riding her bicycle outside her apartment building before entering the laundry room. Once inside, Juan grabbed her arms and shook her before sexually assaulting the girl twice.


The girl was able to escape when her mother began yelling her name after seeing the bike unattended. The girl’s mother went into the laundry room and found Juan trying to get out through a back window.

Juan’s belt was unbuckled and his pants’ zipper was down, the mother told detectives.

The Palm Beach Post reported that while a DNA swab sample was being obtained from Juan, he told a detective: “It’s [the girl’s] fault this happened.”

Juan is being held in the Palm beach County Jail.