Conoy Township, Pennsylvania, made the news the other day when it posted signs reminding everyone that it was not a “gun free” zone.

It seems that a disarmist took umbrage at the signs and vandalized several. Few are surprised at the vandalism.  It is a stark difference between law abiding second amendment supporters and disarmists.

I do not recall seeing a single “Gun Free Zone” sign that has been vandalized. 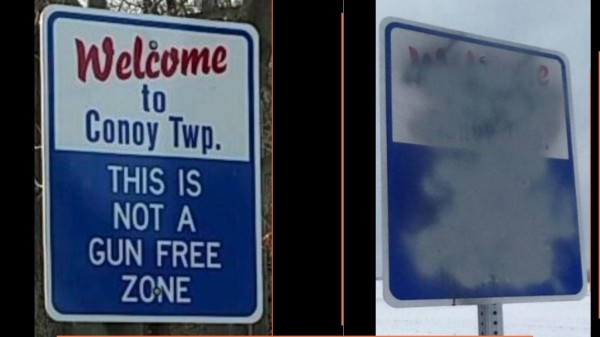 It is axiomatic that second amendment supporters and Tea Party members (the two groups appear to have considerable overlap) are polite, peaceful demonstrators that pick up after themselves at demonstrations, often leaving a place cleaner than when they came. The disarmists are harder to ascertain, because their demonstrations are so small and irregular; but they have a reputation as being less respectful of other peoples property and public order. The clearest example of this would be the various “occupy” demonstrations that occurred around the nation.


Showing an strong entrepreneurial spirit, Conoy Township is capitalizing on the worldwide publicity that has come with their display of civic pride.  They will be selling the signs to those who want one, at a profit.

Now, the township is fielding requests from people who want to buy similar signs. Phone calls and emails have come in from elsewhere in Pennsylvania and California, Texas, Florida, Mississippi, Ohio, Idaho, Kentucky, and other states, township supervisor Stephen L. Mohr said. Requests for signs have come from pro-gun and 2nd Amendment organizations, too.

He expects the township will buy new signs from a private company and then resell them. Campaign-like yard signs and window stickers are also being planned. No prices or quantities have been determined.

A couple of the signs that were vandalized have surveillance cameras watching them, so it is possible that the vandal or vandals will be identified.  Showing considerable restraint, the township said that charges would not be pressed, if the perpetrators would agree to perform some community service.  Most vandalism of this sort is done by minors or young adults, but we have seen some election signs vandalized by older people in heated races.

All the vandalized signs have been cleaned up, two by an outraged mother and resident of Conoy, and two by a road crew.  The cooperation between local government and residents is emblematic of small town and rural America.

“I saw a post on Facebook they were vandalized and it made me mad,” Guringo said. The mother of three sprang to action.

Despite it being dark outside and below 20 degrees, she used a rag and cleaning liquid to remove spray paint from a sign on Bainbridge Road and another along Route 441, across from Riverroad Produce & Garden Center,  1835 River Road, Marietta.

Some people have been surprised at the cost of the signs for the township.  It has been reported that 13 signs cost about $500, or about $31 per sign.  A poster on freerepublic.com says that someone he knows paid $250 to replace a stop sign:

A friend of mine took out a stop sign about 15 years ago and the county charged him about $250 to replace it. Accounting for inflation I figure at least $400 dollars to day.

That likely included the cost of installation and clean-up, which adds up pretty fast when you include the cost of power equipment and a crew.

Not many are surprised that the industrious and thrifty people of Conoy have found a way to make the signs pay for themselves.


Previous New Hampshire: Sell A Gun To A Friend, Go To Jail!

Next [WATCH] Protestors Saying They Feel 'Played'... Heating up Against the Attorney for Michael Brown's Family